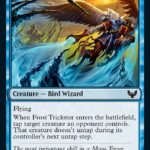 Blue decks are historically the controlling strategies in Magic: The Gathering. Usually, Blue is a powerful support color that gives you a tempo advantage and paves the way for big, impactful creatures to hit the battlefield.

In Strixhaven: School of Mages, Blue is found in Prismari and Quandrix strategies. The Red and Blue aligned Prismari color pair wants to cast Instants and Sorceries that cost five mana or more. The Blue and Green aligned Quandrix pair wants to ramp and take advantage of +1/+1 counters synergies.

Both strategies should take advantage of Blue’s ability to bounce and tap creatures to slow down the opponent while you play lands and set up plays.

Here are the best Common and Uncommon Blue cards for STX Limited.

Frost Trickster is a super-charged Frost Lynx. This is a playable card that locks down a key Creature and can be a real threat on its own. A 2/2 Flying Creature is going to eventually require an answer. This is one of the strongest Common creatures in Blue.

This is a reactive tempo play that won’t completely remove a Creature but it will set your opponent back. This is an excellent spell that’s mostly worth casting on an attacking creature so you get the two-mana discount. A key aspect of Bury in Books is that STX is filled with tokens. Bury in Books removes tokens permanently. In all situations, this is a playable spell.

Quandrix and Prismari decks both want to generate big mana to cast their finishers. Kelpie Guide is a decent piece of ramp in Blue that turns into a bomb later in the game. The first ability is solid and can get you an extra mana. This helps cast bigger spells a turn early. The second ability is excellent. Quandrix builds should hit eight lands quicker than other color pairs. At eight lands, Kelpie Guide becomes an Icy Manipulator and has a game-winning impact on the battlefield.

Divide by Zero doesn’t hit tokens. That’s a big downside for this spell. To make up for it, this card has Learn on it. Bouncing a spell or permanent can be a good tempo play. This synergizes nicely with Lesson because it can fetch you a more permanent removal option like Introduction to Annihilation. Divide by Zero slows your opponent down and gets you a card. For three mana, Divide by Zero provides solid value.