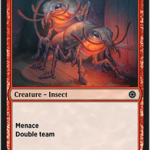 Alchemy Horizons: Baldur’s Gate is the first set made for Draft that includes digital-only cards and mechanics.

In adapting cards from Battle for Baldur’s Gate, several cards were changed that wouldn’t work in traditional Limited. Many of these cards were given one of the three new mechanics coming in Alchemy Horizons: Boon, Specialize, and Double Team.

Red is an aggressive color with high-power Creatures and access to several pieces of strong removal. There are five cards with Double Team in Red. Treasure tokens (R/B) and Dragons (R/U) are supported with Stompy pack tactics (R/G) and go-wide aggro (R/W) being other archetypes.

Here are the best Red Common and Uncommon cards for Alchemy Horizons Limited.

This is a solid four-mana Dragon that accrues value when it dies. This 2/4 body can grow its attack for 1R. This makes it a difficult Creature to block if you leave mana up. It’ll often trade favorably in combat because when it dies, it gives the next Creature spell you cast a perpetual buff.

Even if it eats a removal spell the turn it enters the battlefield, it’ll still have an impact on the battlefield by turning your next Creature into an above-rate threat.

Kobold Warcaller is another case of perpetual looking great in Limited. One-mana 1/1s are hit-or-miss in Limited. They usually aren’t great unless the format allows it to trade favorably in combat or it can enable a broader strategy.

Giving a Creature card in your hand haste is strong. This card can set up later turns. It demands some kind of answer because if every one of your Creatures enters with haste, that’s more pressure than most decks are able to handle. Kobold Warcaller fits into aggro decks, but also can play well in a slower build. Slowly build up your battlefield then turn the corner with a finisher that suddenly has haste.

Red has access to one of the best removal spells in the format. Four damage to a Creature or Planeswalker deals with most threats you’ll come across. You can save it for an opponent’s threatening four-drop, or use it early and benefit from Boon. Giving the next Creature spell an attack buff can turn a 2/2 into a 3/2 or better.

It’s a strong removal spell that any Red deck will want.

There isn’t a better two-drop in Red than Battle Cry Goblin. This Creature sets up big alpha strikes with its +1/+0 and Haste ability for the team. Note it can be activated more than once. It’s an excellent mana sink.

Pack tactics is a nice trigger. It adds another Creature to the battlefield and applies more pressure on the opponent during their blocking phase.

Three damage to a Creature or Planeswalker for two mana is the worst this card can get. That’s already a playable card in every Limited format. Similar to its impact in Adventures of the Forgotten Realms, Dragon’s Fire can punch above its weight. It scales well as the game goes on with the option to reveal a Dragon.

This card can easily deal four or five damage, earning you a substantial tempo boost. At Common, always look to pick up a Dragon’s Fire for your removal.

Red usually doesn’t have access to great card draw spells. Unexpected Windfall has proven its worth in Constructed formats and is just as good in Limited. Discarding a card to draw two is fine, but the value comes from the two treasure tokens Unexpected Windfall creates.

This card fuels token synergies found in Red and Black while also being a solid spell for other Red builds. The high mana value means you don’t want to run too many copies of Unexpected Windfall, but one will go a long way toward your deck’s overall consistency.

Double Team is a new mechanic that conjures a duplicate of the attacking Creature with this ability. Then they both lose Double Team. It appears to be a good way of trading in combat and coming out on top by putting a card in your hand.

It rewards decks that want to attack often. Giant Fire Beetles is a three-mana 2/2 with menace. This evasion improves its chance of surviving its attack. Then if you get two of these on the battlefield, you’re applying real pressure on the opponent.