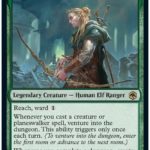 Players only have a short time to capitalize on the MTG Arena Limited Sealed event to earn Dungeons & Dragons: Adventures in the Forgotten Realms booster packs and gems.

Sealed is a Limited format in Magic in which players receive six booster packs and must craft a deck from them. The Limited event follows a best-of-one format on MTG Arena, offering players an additional three AFR booster packs for any number of wins and up to 2,200 gems for six wins and no more than two losses. Playing the event requires an entry fee of 2,000 gems.

The most recent AFR Sealed event will no longer be active past July 31 on MTG Arena. Investing in the event can provide huge returns to players, from Rare and Mythic Rare cards to gems. Here are the best AFR cards to build around in Sealed before the event ends, from Common to Mythic Rare bombs.

Not every Rare or Mythic Rare in AFR is worth building a deck around. Feywild Trickster is a Blue Uncommon three-drop that produces a 1/1 Blue faerie Dragon token with Flying whenever a die is rolled. The gnome warlock is ideal to build around within UR, depending on the number of creatures with d20 rolls.

Devoted Paladin is a five-drop AFR Common that pumps the whole team +1/+1 upon entering the battlefield and gives every creature Vigilance until the end of the turn. Devoted Paladin is a strong late-game finisher within go-wide MTG Aggro style builds, and works best in RW builds, especially if you have an Adult Gold Dragon.

Monk of the Open Hand

Monk of the Open Hand is an Uncommon White 1/1 creature that gains a +1/+1 counter whenever you cast a second spell each turn. Within AFR Aggro and Control Sealed decks, the counters on Monk of the Open Hand increase quickly, often before an opponent realizes they should have removed it when it entered the battlefield.

Chump blockers can easily stop Monk of the Open Hand, so be sure to add combat tricks like Bull’s Strength when playing WG. Fly is also a solid option that works on the elf monk when playing Blue and Fifty Feet of Rope is a mana-sink Artifact that can tap an opponent’s creature, preventing it from un-tapping during its next untap step.

Varis, Silverymoon Ranger is a Legendary human elf ranger in Green with a rarity of Rare. Once on the battlefield, Varis triggers Venture upon a creature or planeswalker spell getting cast. The human elf ranger also has Reach and Ward with 3/3 stats for a CMC of 1GG.

As an added bonus, Varis creates a 2/2 wolf creature whenever a dungeon is completed. Creating the token wolf isn’t a priority, but being able to block pesty low-powered flyers while triggering Venture offers a huge advantage in AFR Sealed. Varis, Silverymoon Ranger slots right into Green builds within the three-drop spot and synergizes well with White and Red.

With the addition of multiple AFR cards creating Treasure tokens, players can splash Westgate Regent in a number of different Sealed decks. The five-drop vampire has Flying and Ward, and when it deals combat damage to a player, Westgate Regent gains that many +1/+1 counters on it.

The vampire works best in RB but can also work well in RG as a splash. Sealed players who pick up an Evolving Wilds should include the land when splashing Westgate Regent.

Go wild with Treasure tokens utilizing Xorn in RG and RB Forgotten Realms builds. The Red elemental creates one extra treasure token and can quickly provide mana ramp for much larger creatures. The only downfall to Xorn is its defense of two, leaving it susceptible to removal.

Playing Xorn on curve is a mistake unless you are creating treasure tokens by attacking with a creature like Hoard Robber, or are casting an Instant that turn which produces a Treasure token. Gaining tokens off Hoarding Ogre when it attacks is a solid combo.

Triggering the AFR Venture mechanic upon entering the battlefield and when attacking, Nadaar, Selfless Paladin is an explosive three-drop Rare in White. In conjunction with other cards that utilize Venture, completing a dungeon is a breeze, earning all other creatures you control +1/+1 when Nadaar is on the battlefield. Nadaar, Selfless Paladin also has Vigilance, allowing the dragon knight to attack and block when facing off against low-powered creatures.

Card advantage and evasive attacks go a long way within MTG Limited formats, which is why Iymrith, Desert Doom is such a powerful AFR Mythic Rare to build around. The dragon is a five-drop 5/5 with Ward as long as it’s untapped. Upon dealing damage to a player, you draw a card and if you have fewer than three cards in hand, draw cards equal to the difference.

The ability to block most large creatures during the late game while filling your hand with cards is a huge advantage. Combo Lymrith, Desert Doom with Devoted Paladin and it’s most likely an easy match win.

The MTG Arena AFR Limited Sealed event is scheduled to run until July 31.