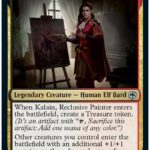 The Magic colors Red and Black in AFR Limited Draft have a Sacrifice and Treasure theme. Utilizing Kalin, Reclusive Painter, and an Uncommon Legendary Draft signpost, the RB Limited build rewards players when a Treasure token is used to cast a spell. Black supports the build with solid removal and Sacrifice shenanigans while Red aggressively controls the board state and pumps out Treasure tokens.

Kalin, Reclusive Painter is a Human Elf Bard with a casting cost of RB. the AFR artist has 1/2 stats and creates a Treasure token upon entering the battlefield. Susceptible to removal, Kalin pumps creatures that enter the battlefield with a +1/+1 counter when mana from a Treasure was used to cast it.

Equipment like Leather Armor can help protect Kalin, along with the Black Instant Feign Death. 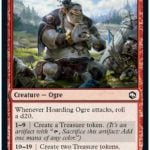 Shambling Ghast is a solid Black one-drop that contains multichoice abilities upon death, one of which makes a Treasure token. Devour Intellect is another solid early drop that can disrupt your opponent’s hand, especially when a Treasure token is used to cast it.

Skullport Merchant is a three-drop 1/4 dwarf featuring a mana sink in conjunction with sacrificing a creature or Artifact (Treasure token) to draw a card. Jaded Sell-Sword is a four-drop 4/3 that enters the battlefield with Hase and First Strike when a Treasure token was used as mana to cast it. Hoarding Ogre is a four-drop 3/3 who utilizes the AFR d20 mechanic to create Treasure tokens. 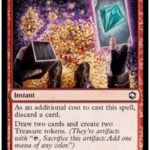 Unexpected Windfall is a decent four-drop Instant that draws two cards and creates two Treasure tokens. Thieves’ Tools is a two-drop Equipment that prevents creatures with a power of three or less from getting blocked upon attacking. And Dueling Rapier is a solid Equipment that attaches to a creature upon entering the battlefield.

Devour Intellect hits cards in hand and Grim Bounty is a four-drop Sorcery speed spell that destroys a target creature or planeswalker. It’s on the expensive side for removal but also creates a Treasure token, adding value to the RB Limited build. 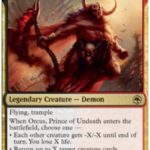 Orcus, Prince of Undeath is a Rare AFR Legendary demon with Flying and Trample that can take advantage of an abundance of Treasure tokens. Meteor Swarm is a powerful removal at the rarity of Rare, able to deal eight damage divided as you choose among “X” target creatures and/or planeswalkers.

Limited Draft begins on July 8 with the digital launch of AFR via MTG Arena and Magic Online. The global tabletop release is scheduled for July 23.