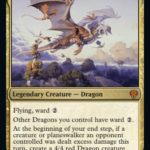 Rare and Mythic Rare bombs can tend to take over a Limited format. This isn’t the case with Dominaria United (DMU), so far. But there are several high-rarity cards that will help define the meta and potentially push it. Most of the Rare and Mythic Rare DMU cards aren’t a pack one/pick one card and should get passed over for an Uncommon that supports one of the best Dominara United Draft archetypes.

Hanging out as fringe Mythic Rare and Rare bombs within the DMU format are three cards: Weatherlight Compleated, Ajani, Sleeper Agent, and Defiler of Dreams. The artifact boat slots right into a BW build or even an RB deck whose shell is built around sacrifice themes. Ajani is a solid planeswalker in WG decks but not a bomb. And Defiler of Dreams is a really good card in any spell-focused deck using the color Blue, preventing such builds from running out of gas during the late game.

From legendaries and kings to angels and herds, here are the best Rare and Mythic Rare Dominaria United bombs within the Limited Draft and Sealed format.

Dragons aren’t a strong theme within the DMU Limited format but can provide plenty of power on their own. Ruth, Liberated Primeval is such a dragon and a legendary one at Mythic Rare with a mana cost of 2RGW.  The dragon slots right into the five-color Domain archetype as a top-end finisher and can work in three-color builds as well with the colors WRG.

Ruth, Liberated Primeval is a Mythic Rare bomb in the DMU Limited format because of its ability rather than its stats, which are still powerful. Synergizing with the Domain theme in Green, excess damage dealt by one of your creatures to an opponent’s creatures results in the creation of a 4/4 Red dragon creature with Flying at the beginning of your end step.

Serra Paragon ranks as a Mythic Rare bomb in the DMU format because of her ability, similar to Rith, Liberated Primeval. The angel is a four-cost 3/4 creature with Flying, which is fine but nothing to write home about.

The angel shines by being able to reanimate a permanent spell with a mana cost of three or less from the graveyard once per turn. Serra Paragon will slot right into GW go-wide decks, RW Aggro builds, BW,  and can even get splashed in UR.

Thriving in five-color Domain decks or any staple two-color archetype splashing Green as a third color is Herd Migration. The Sorcery speed spell that costs seven mana to cast is a finisher that synergizes with the Domain mechanic to produce 3/3 Green beast creature tokens for each basic land type on the battlefield under your control.

As an added bonus, players can discard Herd Migration for only 1G to search their library for a basic land card to put into hand. Paying the activation cost to discard the spell also gains that player three life points.

Tokens are meta within the DMU LImited format, making Temporary Lockdown one of the best Enchantments within the Dominaria United set. It only costs 1WW to cast and exiles each nonland permanent with a mana value of two or less until it leaves the battlefield.

Temporary Lockdown won’t hit a bunch of creatures but it will wipe out a go-wide board full of tokens that won’t come back even if the White Enchantment is removed from the battlefield.

The MTG color Green isn’t one of the strongest colors on its own within the DMU Limited format but it is the strongest splash color. And players splashing Green are doing so for Domain effects and big stompy creatures. Llanowar Loamspeaker supports ramp and five-color strategies by tapping for one mana of any color.

Llanowar Loamspealker is a low-cost creature, only costing 1G to cast, and has decent 1/3 baseline stats that can block early game creatures if necessary. As an added bonus, Llanowar Loamspeaker can also gum up a board by turning any land you control into a 3/3 elemental creature that has Haste until the end of the turn

King Darien XLVII, or just King Darien, slots perfectly as a bomb DMU Rare into the GW Limited archetype. But he can also support multiple creature-based archetypes using the colors Green and White due to his anthem of pumping every creature on the battlefield by +1/+1.

The king also has a mana sink that synergizes with GW token go-wide strategies and even with BW decks that are splashing Green. And as an added bonus, sacrificing King Darien gives all tokens Hexproof and Indestgructable until the end of the turn, acting as a solid counter to Temporary Lockdown.