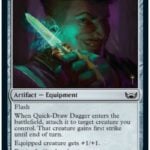 Combat tricks have increased in value as the Streets of New Capenna Limited Draft meta evolves, leaving players wondering when and which ones to pick.

Shortly after the release of the Streets of New Capenna (SNC) set, players were favoring two-color archetypes while splashing a third. And as the meta continued to develop, combat tricks became more of a priority with archetypes like GW splash, UW splash, and RB splash earning the highest win percentages. Lands are still more of a priority over combat tricks, but depending on your deck and your acquired mana fixing, choosing a trick over land is no longer frowned upon.

Here are the best New Capenna Limited Draft combat tricks to pay attention to when drafting.

The SNC set doesn’t have an abundance of Equipment, and most of it is unplayable. But Quick-Draw Dagger has its benefits. The Artifact has Flash, allowing players to use it as a combat trick. Upon entering the battlefield, it attaches to a creature and gives it First Strike, along with +1/+1 stats. And should your creature die, it only costs one mana to reequip it, but it can only get reequipped at Sorcery speed.

Green is a commonly splashed color within the New Capenna Limited Draft. The best combat trick in the color Green is For the Family, especially within builds that want to go wide (GW). For one mana at Instant speed, the target creature gets +2/+2 until the end of the turn. If you have four or more creatures on the battlefield, though, the target creature gets +4/+4 instead until the end of the turn.

Fake Your Own Death

The color Black can either want cards in your graveyard via UB or go Aggro in conjunction with the color Red. Fake Your Own Death supports aggressive New Capenna Limited Draft builds, pumping up the target creature’s stats by +2/+0. The idea is to make sure the creature trades with an opponent’s big and threatening creature.

Upon your creature dying, it’s returned to the battlefield tapped. And, as a bonus, you get a Treasure token to help flood the board with your aggressive creatures.

Single-mana combat tricks are always rated higher than two-drop ones in a Limited format, and Boon of Safety is such a decent combat trick that it’s even seeing gameplay in the Standard format. Shield Counters work great with aggressive builds (GW) while also serving as a defensive option for bombs in play. Not only does Boon of Safety permanently grant your target creature a Shield Counter, but it will Scry one too upon getting cast.

Majestic Metamorphis is the most expensive good combat trick and likely the weakest on this list. The upside to the Blue Instant is that it can draw a card, which is worth paying one additional mana for under certain circumstances. It can also deal with UW Flying creatures, or strike in for lethal damage. Majestic Metamophis is hardly a mid-pack pick and will likely end up in your sideboard. But you’ll be happy to have it around when you need it.

Antagonize can either feel really good or mediocre when playing. Trading a cheap 1/1 token into an opponent’s powerful attacker feels really good, and so does casting the Red Instant on a creature with Trample. In an aggressive build, however, there’s a huge gap between a one-drop combat trick and one that costs two mana. Choose wisely when putting Antagonize into the main deck.