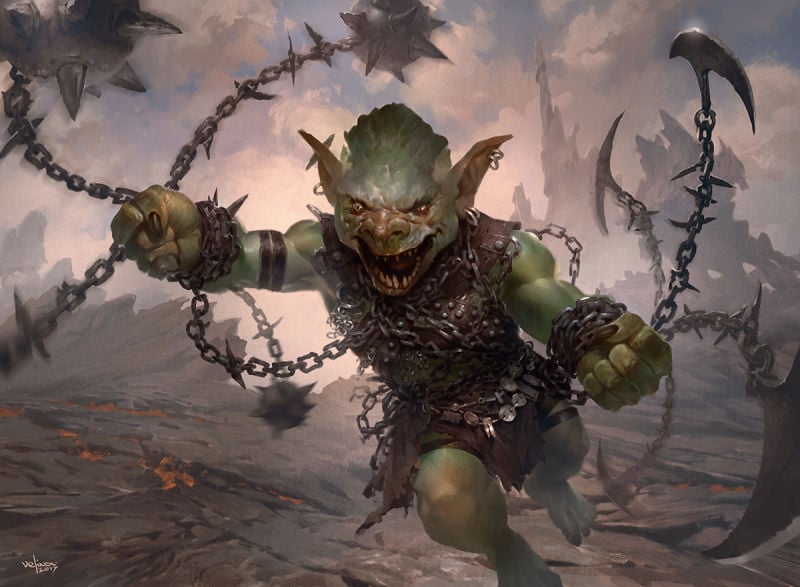 As Magic Arena’s answer to popular formats like Modern and Pioneer, Historic is a digital eternal format using cards going back to Ixalan. With the release of Core Set 2021 in June, some of the top decks in Historic have gotten a few new toys for players to experiment with.

While Historic isn’t a competitive format like Standard or Modern, the introduction of a permanent Historic ranked queue in May opens the door for Arena to be the home for tournament play in this eternal format.

Here are some of the cards from Core Set 2021 that have found early homes in Historic’s best strategies.

At first glance, Gadrak, the Crown-Scourge is a terrifying card. A three-mana 5/4 flying dragon that can create a treasure token every turn is no joke. Its main downsides are that it can only create a treasure when a nontoken creature dies that turn and it can’t attack unless you control four or more artifacts. In most decks that play a few artifacts, this is still a good card that blocks early and starts attacking late. In Tempered Steel decks, Gadrak’s downside becomes a nonfactor.

Gadrak is the most expensive creature in the deck at three CMC, and by the time the dragon enters the battlefield, it’s almost a guarantee you’ll control four or more artifacts. The next turn, Gadrak flies in for five damage in the air before most opponents can reasonably start defending. Throw an Embercleave on Gadrak and it’s almost a guaranteed “good game.”

Nexus of Fate decks have been strong since Historic was created in 2019. The control deck used to be focused on stalling the game with fog effects before hitting an infinite turn loop with Nexus of Fate. Now, the deck is still annoying but mildly more interactive than its Standard or early Historic counterparts.

Nexus of Fate strategies have a new way to stall out games with Discontinuity. Players of other eternal formats are used to seeing “end the turn” spells, but this is a first of its kind in Arena. Discontinuity simply ends the turn for six mana (3UUU) or a reduced cost of four mana (2UU) when cast on your turn.

The card doesn’t do that much on its own. But ending a turn at the right time hurts decks that rely on crucial turns to shift the balance of power. Simply ending the turn before a key Expansion Explosion activation or in response to a key creature or planeswalker will give you the tempo advantage needed to pull ahead—or just cause the opponent to surrender.

Core Set 2021 gave flying decks a powerful counterspell that seems to be replacing Quench as the go-to option for tempo decks. Lofty Denial is a two-mana counterspell that was made with flying in mind. If you control a flying creature, the opponent will pay four mana to prevent their spell from being countered. In strategies like Mono-Blue Tempo, this is effectively a two-mana counterspell for anything in the early game. It’s the ultimate tempo piece that gives mono-blue strategies a boost.

Mono-Blue Tempo was a dominant deck when it was in Standard by taking advantage of cheap, unblockable creatures, counterspells, and Curious Obsession to counter everything and often win with one or two creatures on the board. The strategy has evolved to include primarily flash flyers to get over the top of lower-to-the-ground Gruul or Mono-Red decks. Due to a recent shift to flying creatures, Lofty Denial became a top counterspell option for Mono-Blue Tempo.

With this card being printed in Core Set 2021, it’s almost a certainty Wizards will print goblins with strong activated abilities that Conspicuous Snoop can take advantage of. For now, the card is still strong by just being a goblin version of Courser of Kruphix.

Historic Humans got tons of support in Core Set 2021. Legendary creatures Subira, Tulzidi Caravanner and Mangara, the Diplomat are seeing some light play in Human lists. Ancient Ziggurat is a land that helps with the four-color requirements. But one of the stronger cards that Human strategies received in the new set is Niambi, Esteemed Speaker.

Niambi finally received a playable card and it slots right in with the typical Humans deck. Niambi can enter the battlefield at instant speed, and when she does, she bounces one of your creatures back to your hand and you gain life equal to its converted mana cost.

This ability synergizes with the strong enter the battlefield triggers that Humans have. She can bounce Charming Prince, allowing you to play it again, or a Kitesail Freebooter or Hostage Taker to deal with new threats. Her activated ability lets you discard a legendary spell to draw two cards, which is a great way to filter out dead cards in your hand, especially with a legendary-heavy deck like Humans.