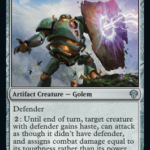 Lower-rarity colorless Artifact cards in Magic: The Gathering Limited are usually filler cards that pad out a decklist when you’re running low on playables.

Outside of Artifact-focused sets, these cards have expensive abilities that cater to the set’s mechanics. There are some playable spells that emerge.

These cards aren’t first pick material, they’ll likely be picked later into a pack when options run low. Colorless Artifacts are still nice to have. They can fill in certain gaps and help fix colors if you’ve struggled to pick up dual Lands or more efficient color fixing.

There are 10 Common and Uncommon colorless Artifact cards in Dominaria United. Here are the four best lower-rarity colorless options for Draft and Sealed.

Domain decks won’t mind picking up Inscribed Tablet later into the draft. This is a cheap Artifact with an easy-to-use activated ability. It will help you find a Land and reach full Domain faster. This is crucial because having four or five different Land types is the sweet spot to make Domain cards exceptional.

If you do whiff or don’t need a Land, you can choose to not put a Land in your hand and just draw a card. This will be great in the late game, potentially sending Land pockets to the bottom of your library.

Defenders matter is a fringe archetype in Dominaria United Limited. If your Sealed pool or Draft luck line up well, the strategy can come together and be quite effective. Walking Bulwark is a nice one-mana Creature that helps the deck pressure the opponent’s life total.

This 0/3 has a two, mana activated ability. It can let a target creature with defender attack, assign combat damage equal to its toughness, and swing immediately with haste. Walking Bulwark is a solid Uncommon that should be a key part of the defender archetype.

This card won’t make every deck. It’s still a three-mana rock in a format that contains plenty of ramp and fixing. In a pinch, however, it won’t be a dead card. In the right deck, it’ll be a solid card.

Pauper players are excited about this card’s potential in Constructed. It will fill a similar role in Dominaria United Limited as a four-mana tutor in a dedicated defenders list. This card will help you find a finisher or key enabler for the archetype.

Four mana isn’t too bad for a 1/3 that searches up a card you need. It can block and under the right circumstances be a fine attacker.

If you’re going to commit to playing defenders in Limited, pick Shield-Wall Sentinel.