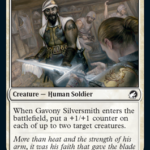 Humans are a staple tribe in Magic and Midnight Hunt’s primary colors for them is White and Green. Common and Uncommon White cards in Midnight Hunt leverage cheap, efficient Creatures to flood the battlefield with threats. Coven is the primary mechanic in White. The new mechanic gives a variety of effects when you control Creatures with three or more different power stats.

Midnight Hunt will release on Magic Online and Magic Arena on Sept. 16 with a full worldwide tabletop release on Sept. 24.

Here are the best White Common and Uncommon cards in Midnight Hunt for Limited.

As essentially a reprint of Banishing Light this is a solid card. This kind of effect is a staple removal spell for White in Limited. Borrowed Time is even better because of how many death triggers and graveyard effects are in Midnight Hunt. Exile-based removal is important.

If Cathar’s Call is allowed to stick on the battlefield it will take over the game. Creating a token every turn, even if it is a 1/1, quickly turns into a strong battlefield. This also works well with Human-tribal support cards because the tokens are Humans. This Uncommon is worth playing in most White decks because of the consistent token generation.

White has no shortage of strong Uncommons. Duelcraft Trainer is a four-mana 3/3 Creature with First Strike. This alone makes the card playable in most Limited formats. If you can trigger Coven, Duelcraft Trainer gives a Creature Double Strike at the beginning of combat. This card allows you to force unfavorable blocks and swing for significant amounts of damage.

Gavony Silversmith is a top-end Creature that supports the go-wide strategy of G/W decks in Midnight Hunt Limited. When Gavony Silversmith enters the battlefield you get two +1/+1 counters to put on your Creatures. This is a good stat boost that helps them in combat.