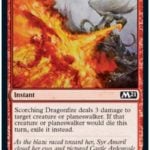 Red in M21 is fairly straightforward: burn your opponents and their creatures or ping and pump. BR Sacrifice decks are possible but likely on the weaker side. RG and UR are probably the two best archetypes to draft when playing Red.

A number of reprints, as with most Core Sets, appear in M21. And in Red, they’re all about Burn. From good old Shock to Spellgorger Weird, here are the best Red Limited Common and Uncommon cards in M21.

There are more solid Commons to draft from in Red than Uncommons. Shock and Scorching Dragonfire are decent removal cards while Spellgorger Weird works well in UR spell decks and Goblin Arsonist in BR Sacrifice builds. Be careful with Red, though, and don’t draft a card that won’t fit into the archetype you’re building.

Scorching Dragonfire is a solid two-cost Instant speed removal that hits for three to either a target creature or planeswalker. Planeswalkers aren’t too much of an issue in Limited, but being able to exile either upon dying is a huge plus.

Shock is a staple in Burn. It’s the perfect removal card during the early game and can be used as a combat trick to get rid of a nasty creature later on. Never pass on a Shock if you’re playing Red.

Sure Strike is great in creature decks and a solid combat trick at Instant speed. Giving a creature a buff and First Strike is a huge advantage since your creature will survive more often than not.

Spellgorger Weird was a powerful card in War of the Spark Limited, played primarily in UR builds. Grab as many copies as you can and you’ll win more matches than you lose.

Black/Red sacrifice builds in M21 Limited are fine but not over-the-top great. If you’re playing a sacrifice build, Goblin Arsonist is a must-have card. Either way, it deals one damage any time it’s played.

Despite Turn to Slag being a Sorcery speed spell, it still deals five damage to any target creature. And as an added bonus, it destroys all Equipment attached to that creature. It’s a solid removal card against big creature decks and worth having at least one copy in the main deck.

Having a way to deal with flyers in Red is nice and Turret Ogre provides enough value that it’s worth playing as a main deck card. As a 4/3 for four, its stats are solid. And in GR builds, its second ability will come in handy.

Several M21 Uncommon Red cards stand out, especially when slotted into the proper archetype build. Only a few, however, are worth picking outside of their designated archetype. Here are the best Red Uncommons to draft in M21.

Volcanic Geyser is a powerful Burn spell that can easily take out an opponent at Instant speed. It’s a solid finisher and can be used alternatively to take out a big creature before it destroys you.

Heartfire Immolator is a solid two-cost 2/2 packed with value. Prowess is nice in UR builds and being able to pay one Red mana to sacrifice it for ping damage is also decent in BR sacrifice.

If you’re playing BR sacrifice, Havoc Jester is a must-have card. As a 5/5 for five, it has solid stats and can ping for damage anytime a permanent is sacrificed.

Any spell that deals five damage to a creature or planeswalker is worth picking up in a draft. Soul Sear hits for five and is cast at Instant speed. It can also cause a permanent to lose Indestructible until the end of turn.

Bolt Hound is worth the three-mana cost due to having Haste. And in a GR or go-wide Aggro build, its ability to add +1/+0 to other creatures when it attacks makes it a decent pick.

Traitorous Greed is only for BR sacrifice builds and is a must-have card. Despite being a Sorcery speed spell, it’s the only “steal your opponent” Red card in M21.