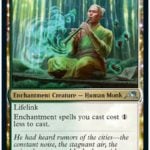 Enchantments and Artifacts from the Kamigawa: Neon Dynasty set have helped shape a new Magic: The Gathering Alchemy meta.

The release of Kamigawa: Neon Dynasty (NEO) brought about a shift within the Alchemy meta, mainly through the creation of the Naya Runes deck. But Enchantments aren’t the only MTG cards popping off within the digital format. Rakdos Sacrifice decks got an upgrade via Oni-Cult Anvil. And legendary lands within the colors White, Green, and Blue have provided additional value to Naya Runes builds, along with Azorius Control decks.

From legendary lands and aggressive one-drops to an emperor planeswalker and Enchantment enablers, here are the best NEO cards that have shaken up the MTG Alchemy format. 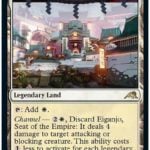 The release of NEO brought about a cycle of five legendary lands: Eiganjo, Seat of the Empire, Otawara, Soaring City, Takenuma, Abandoned Mire, Sokenzan, Crucible of Defiance, and Boseiju, Who Endures. The most popular within the MTG Alchemy format have been Eiganjo, Seat of the Empire, Boseiju, Who Endures and Otawara, Soaring City—found in Naya Runes and Azorius Control decks.

Typically only one copy of each NEO legendary land is played in the main deck, providing immense value via the MTG Channel mechanic or as a much-needed untapped land upon entering the battlefield.

Rabbit Battery is an aggressive one-drop in the MTG color Red that has Haste and can get equipped to another creature via the NEO Reconfigure mechanic. The Artifact creature is often found within Rakdos Aggro Alchemy decks, providing early game value that can translate into late game value via Reconfigure for a cost of only one Red mana. Rabbit Battery has Haste and gives the creature it is equipped to Haste as well, along with +1/+1 stats.

Fable of the MIrror-Breaker 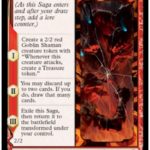 Slotting ideally into Rakdos Midrange Alchemy decks, Fable of the Mirror-Breaker is a NEO saga that transforms into a creature via its third chapter. At the cost of 2R, it puts a 2/2 token onto the battlefield, provides card advantage, and transforms into a 2//2 creature that can copy a nonlegendary creature and give it Haste at the cost of one mana and tapping Reflection of Kiki-Jiki.

The copy combo via Reflection of Kiki-Jiki is often paired with the Innistrad: A22 card, Citystalker Connoisseur. It puts a 3/3 Deathtouch on the battlefield with Haste that has an ETB effect and synergizes nicely with Oni-Cult Anvil within Rakdos Sacrifice Alchemy decks.

March of Otherworldly Light is an Instant spell from the NEO set that can exile an Artifact, creature, or Enchantment. The spell is flexible in that you only spend the mana you need to cast and slots nicely into Azorius Control builds within the MTG Alchemy format.

Sacrifice decks got a huge buff within the Alchemy format via Oni-Cult Anvil from the NEO set. It synergizes with other Artifacts by creating a 1/1 Artifact token whenever an Artifact you control leaves the battlefield. Rakdos Sacrifice decks like to run Oni-Cult Anvil in conjunction with Skullport Merchant that produces an Artifact Treasure token upon entering the battlefield, along with Bloodtithe Harvester who creates a Blood Artifact token upon ETB as well.

Slotting into Mono-White Aggro builds as well as Azorius Control decks, The Wandering Emperor has left her mark on the MTG Alchemy meta. She sets herself apart from other NEO planeswalkers in that she has Flash, along with three planeswalker abilities that support a variety of Magic archetypes.

Enchantments have taken over the MTG Alchemy meta thanks to powerful enablers from the NEO set like Jukai Naturalist. The two-drop human monk reduces the cost of Enchantment spells, synergizing with the Runes from Kaldheim. Cheaper Enchantments fuel other NEO cards like Generous Visitor and Kami of Transience.

Players most often include Jukai Naturalist within Naya Runes decks, able to run the Kaldheim Runes within the colors Red, White, and Green. The human monk also synergizes with Runeforge Champion, a three-drop that lets a player pull Runes from their library or graveyard upon entering the battlefield.