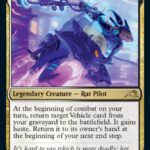 Historic has remained largely stable for the past year, with very few changes in the Magic: The Gathering format’s metagame.

The format is still Blue-heavy, with Izzet Phoenix and U/W Control some of the most played decks. This is enabled by cheap, powerful Blue cards introduced to the format over the last year. Cards like Expressive Iteration, Consider, and Archmage’s Charm are dominant spells.

Red is another color that makes up the majority of Historic’s top decks. Unholy Heat and Dragon’s Rage Channeler are already top-level cards in Modern and Legacy, so their presence in a less powerful format like Historic yields great results.

Many of the best cards from Neon Dynasty for Historic either counter the top strategies in the format or have found a home into their already optimized, tight decklists.

Here are the top eight cards from Neon Dynasty shaking up Historic.

There aren’t many White-based aggro decks in Historic, a format that’s primarily focused on Blue and Red cards. If one were to emerge, The Wandering Emperor would be a key part of that strategy finding success.

Since the beginning of Historic, Rakdos Sacrifice has been a consistent deck. The value-based midrange deck looks to take advantage of death triggers and returnable threats like Kroxa, Titan of Death’s Hunger to slowly grind the opponent out.

Right now, Rakdos Sacrifice isn’t projected to be an elite deck in the format, but with three players running the archetype at the Neon Dynasty Championship, there’s a possibility a strong performance will change people’s perceptions. Oni-Cult Anvil is a free source of Artifact sacrifice that also generates a token, which plays well with Witch’s Oven and Deadly Dispute.

At six-mana, Farewell is a strong board wipe that can remove any threat your opponent has. There are two key aspects of Farewell that lead it to be a removal option for U/W Control decks. The removal is exile-based. It exiles Creatures, Artifacts, Enchantments, and graveyards. This is important because it gets through indestructible or Escape abilities.

Hitting graveyards makes Farewell playable and is its most important mode for Historic. The format’s top decks heavily play from the graveyard. Izzet Phoenix, Golgari Food, and Rakdos Arcanist are all decks that rely on the graveyard to win. Farewell can clear the battlefield and leave nothing in the graveyard for them to recover with.

Exile removal is a theme for the best answers in Historic. U/W Control doesn’t get access to Prismatic Ending, but March of Otherworldly Light is almost as effective and the best single-target removal spell in its arsenal.

The alternate casting cost is a good way to get rid of spells and help efficiently deal with a threat. It can scale with the game, hitting anything from Cauldron Familiar for two mana or a much larger Korvold, Fae-Cursed King.

While U/W Control is the current home for March of Otherworldly Light, there’s potential for it to slot in as removal for some of the format’s other top archetypes as Historic matures past Neon Dynasty. White midrange builds can use the spell as an efficient option that doesn’t stress the mana base. It gains even more application if these decks aren’t splashing Black for its removal suite.

Paired with Parhelion II, Greasefang is a strong combo enabler that is the centerpiece of its own vehicle reanimation combo deck. Mardu Greasefang and its variations look to reanimate Parhelion II with Greasefang to attack with 13 points of damage in one turn. It’s a formidable list that takes advantage of one of Neon Dynasty’s most interesting legendary Creatures.

Greasefang doesn’t really have much application in any other deck. However, it did create a new archetype that could explode on the ladder with a strong performance at the Neon Dynasty Championship.