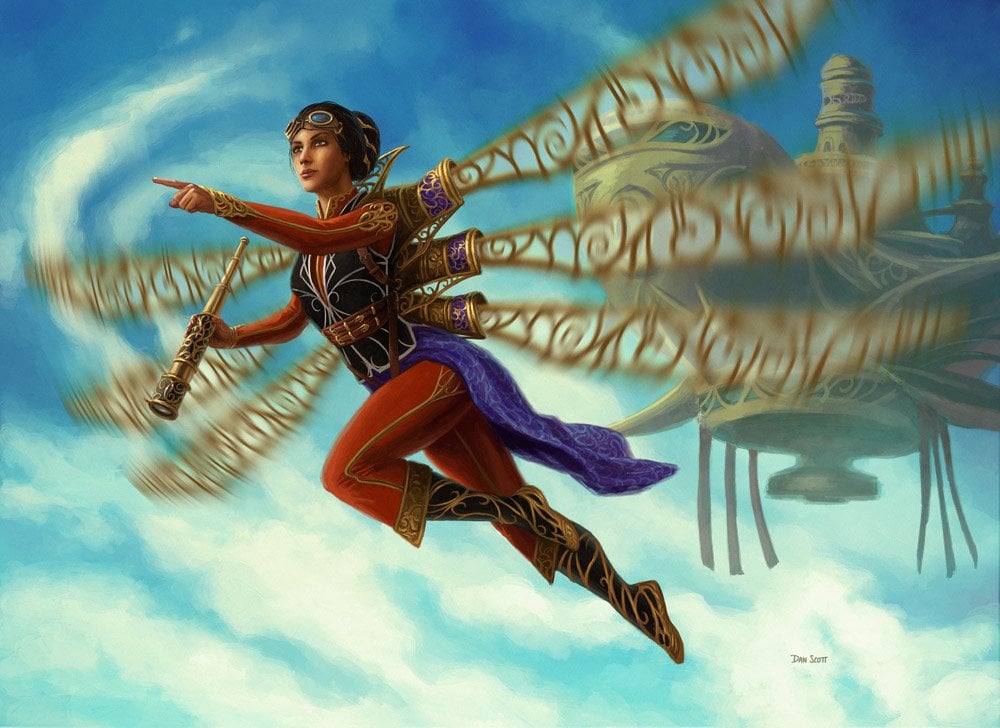 Most of the color pairs do what they’re historically strong at, but the inclusion of mechanics like vehicles, improvise, and energy will shape how players approach their drafts.

Here are the best archetypes found in Kaladesh Remastered.

U/G is the best color pair for using energy counters to their fullest potential. Energy is a mechanic where players get energy counters that can be saved up between turns. Players can use energy for payoffs like Aetherworks Marvel or Dynavolt Tower. Energy is one of the strongest limited mechanics that can lead to dominant wins with the proper win conditions. Some cards that might push a player into the U/G color pair are Rogue Refiner and Longtusk Cub.

Other colors can and should take advantage of vehicles in Limited, but Boros does provide a shell for aggressive vehicle strategies to thrive. The power of Boros in a vehicle shell is its ability to go wide with creatures that can pay for crew costs. R/W also contains useful uncommons like Veteran Motorist to make vehicles better, something other color pairs don’t have access to.

Flying is always powerful in Limited. Creatures with flying are hard to block. These strategies are based on flooding the battlefield with a swarm of creatures. In Kaladesh Remastered U/W fliers is another strong archetype with Cloudblazer or Spire Patrol as key uncommons. Another strong aspect is the color pair’s ability to use vehicles to supplement its gameplan. Aethersphere Harvester at rare and Sky Skiff at common are two vehicles that can thrive in a flying-centric deck.

The U/R pair is another that enables a variety of approaches during Limited deck construction. Izzet thrives with go-wide strategies and leveraging its mass of creatures to improvise out massive threats. Maverick Thopterist and Whirler Virtuoso reward players for playing U/R decks and Enraged Giant and Wind-Kin Raiders can have their costs greatly reduced by thopter tokens.

Orzhov can do a lot. To maximize the B/W colors, a sacrifice theme is the way to go. Revolt is a powerful mechanic that rewards sacrificing creatures. This can be done by sacrificing thopters created from the fabricate mechanic. After a creature dies, cards like Hidden Stockpile and Vengeful Rebel get a substantial boost from revolt triggers. These decks thrive in grindy, value-oriented games.

Instead of using fabricate to create tokens to sacrifice, G/B wants to use fabricate to put +1/+1 counters on creatures. Fabricate is a flexible mechanic that feeds into multiple strategies. Golgari Counters is boosted by Winding Constrictor, the best uncommon for this archetype. G/B also takes advantage of the energy synergies found in green. Bristling Hydra and Rishkar, Peema Renegade are bombs that can push this deck through the finish line. Armorcraft Judge is another uncommon that can help win games with the proper setup. G/B needs to rely on powerful removal spells in black to deal with problematic flying creatures, which is a weakness.

U/B is able to get value out of every mechanic in the set to develop a powerful control gameplan. It’s best to lean on fabricate and improvise to cast threats at a discount while using black’s removal suite to diminish the opponent’s defenses. Tezzeret’s Touch is a powerful uncommon that plays into a possible graveyard-based value engine. This archetype lives and dies by the quality of artifacts available during the draft.

In a set full of artifacts and constructs, Gruul stays true to itself and focuses on big, scary creatures to win the game. The G/R colors allow players to use green’s strong energy mechanics and red’s aggressive attackers to create a threatening board state. Voltaic Brawler and Outland Boar are two of the signpost gold cards that make this archetype work. Another strong aspect of G/R is the ability to turn thopters created by red creatures to pilot vehicles. Combining vehicles and stompy green creatures creates situations for valuable two-for-ones.

Kaladesh Remastered Limited events are going on through November. A high-stakes Draft Challenge event kicks off on Nov. 28 to Dec. 1. Be sure to familiarize yourself with the Limited environment to earn up to 20,000 gold and 40 Kaladesh Remastered packs.