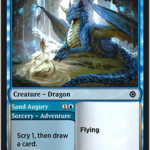 The archetypes in Alchemy Horizons are similar to those found in Battle for Baldur’s Gate. Blue occupies the same role as an excellent support color and the glue that holds several archetypes together.

Here are the best Blue Common and Uncommon cards for Alchemy Horizons Limited.

Perpetual is an interesting mechanic in a Limited context. Applying permanent effects to cards can greatly swing a game of Limited where every piece counts. Turning an opponent’s two-drop into a 0-power card will essentially remove it as a factor.

Limited is won through combat and this is a versatile piece of Blue pseudo-removal. Look for opportunities to use this to win combat. For one mana this card can hit two Creatures. It’s good value for the price at Common.

The U/G Dragon deck needs to pick up a handful of lower-rarity Creatures in Draft to make the archetype work. You can’t simply rely on one or two Rare or Mythic Rare bombs. Juveline Mist Dragon is a nice five-mana Dragon with an aggressive 4/3 body.

When it enters the battlefield, Juvenile Mist Dragon taps down an opposing threat. This is a good way to temporarily deal with a flying chump blocker. Dragon decks want to win the game with one or two big combat steps. The enter the battlefield trigger is enough to accomplish that.

Another spell with a perpetual -2/-0 ability, but this one also has a conditional counter like Spell Pierce. In Limited, counterspells are good depending on the format. This is a worthwhile pickup because of its versatility. It can nerf a threat while also dealing with an opponent’s noncreature bomb.

Undersimplify is good at any phase of the game and at two mana it doesn’t require you to take turns off to be able to cast it.

Blur is an alright card. At Common, sometimes all you need is an alright card to get the ball rolling. U/W is focused on enter the battlefield triggers through flicker effects. Blur is a little expensive at three mana, but does flicker a Creature, which will add additional abilities to this card’s upside.

Drawing a card when this spell resolves makes Blur playable. If you’re looking to Draft a U/W deck you’ll want a copy or two or Blur to tie everything together.

In Adventures in the Forgotten Realms Limited, Contact Other Plane was a good card draw spell. There aren’t many better options in this format as well. Simply drawing two cards as the floor is a good deal. It gets even better turning into a Behold the Multiverse and getting card selection and card draw.

If you need Blue card draw, look no further than Contact Other Plane. It will serve any Blue deck well.

Looting and rummaging are excellent in Limited. It’s inevitable that you’ll end up in a position where you’re drawing nothing but lands in the mid-to-late game. Not having a contingency plan for this issue will lead to you getting run over by the opponent.

Dragonborn Looter isn’t the best body as a 1/2 but it’s not intended to block. It also has a relevant Creature type that will synergize with the broader U/G and U/R Dragon archetypes.

Adventure was a remarkable Limited mechanic when it was introduced in Throne of Eldraine. The two-for-one value found with Adventure spells is even stronger in Limited.

You can get value from Sand Augury early in the game to smooth out early draws, then play Young Blue Dragon later in the game if you have nothing better to do.

A five-mana 3/3 isn’t great, but that doesn’t tell the whole story of the card. It fits well into both color pairs that care about Dragons and can be a nice late Draft pickup for any deck running Blue cards.