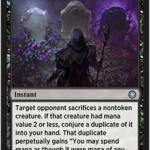 Combining cards from Adventures in the Forgotten Realms and Commander Legends: Battle for Baldur’s Gate, Alchemy Horizons brings a unique Limited experience to Magic players. Several cards are rebalanced to work in a traditional Limited format, and new digital-only cards and mechanics were created for this set.

Boon, Specialize, and Double Team are the three new mechanics introduced in Alchemy Horizons. They each provide dynamic choices and bring a level of consistency that isn’t typically found in Limited.

Black has the most efficient removal. It’s a color that is able to control the board and then drop expensive threats that can close the game. Both Sacrifice (B/G and B/W) are supported alongside control (B/U), and treasure tokens matter (B/R).

Here are the best Black Common and Uncommon cards for Alchemy Horizons Limited.

Armor of Shadows is the kind of card that won’t be a defining card but will win plenty of crucial combat steps throughout the life of the format.

For only one mana it gives a Creature +1/+0 and indestructible. It’s a versatile Instant that can be used to protect one of your Creatures from a removal spell or kill an attacking Creature with blocks. This is cheap, doesn’t require much setup, and will be useful early and late.

In Adventures in the Forgotten Realms, Demogorgon’s Clutches was able to squeeze the opponent of resources and leave them with no threats to match with yours. Forcing an opponent to discard two cards on turn three could leave them with only one or two cards in hand.

Forcing them to mill two and lose two life turns a clunky discard spell into a three-pronged attack on the opponent. Sometimes incidental mill can hurt the opponent if they end up throwing their bomb into the graveyard. Two life is always relevant in Limited. You don’t need to run every copy of Demogorgon’s Clutches you can get your hands on in Draft, but one or two copies will serve you well.

This card is great. Skullport Merchant is a strong blocker and makes a treasure token when it enters the battlefield. The activated ability lets you outvalue the opponent with cards. It’s a generically good card but gets even better in a sacrifice deck. This is both an enabler and a payoff for sacrificing creatures.

Simple, effective removal. Grim Bounty destroys a Creature or Planeswalker and then creates a treasure token. There’s no reason not to run a copy or two of Grim Bounty if you can pick it up in Draft. There are two Black mana symbols, so for those adventurous souls running three or four-color decks, look for other options for removal because Grim Bounty may be too difficult to cast.

Because this set is derived from Battle for Baldur’s Gate, most of the powerful threats will be legendary Creatures. This is why Grim Bounty is valued above a card like Cast Down, which can’t destroy legendaries.

Despite what the ability says, Guildsword Prowler is a good blocker. A two-mana deathtouch Creature is worth playing, but it shines in a dedicated sacrifice deck. When it dies, as long as it’s not blocking, you draw a card. Guildsworn Prowler will usually replace itself, turning it from a fine filler Creature to a welcome addition.

Baleful Beholder is expensive, but Adventures in the Forgotten Realms proved the six-mana cost is worth it. This card is also easy to pick up at Common.

The Antimagic Cone ability is fine. If the opponent has an Enchantment that demands an answer it’s fine. However, the real value comes in Fear Ray. Giving all your Creatures menace enables alpha attacks that should end the game.

Evaluating Grave Choice is difficult, as are most of the digital-only cards. The unique design space they occupy is different than anything Limited has seen. Grave Choice is a solid removal spell that presents the opponent with a choice. At Instant speed, you can deploy this spell at the right time.

Either the opponent sacrifices a less important Creature, but risks conjuring it into your hand, or they sacrifice an expensive threat and have to find another way to win the game. Grave Choice gets significantly worse against token decks, but the ceiling on this card makes it worth its Uncommon slot.