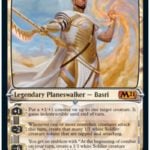 A new planeswalker was revealed today in Magic: The Gathering: Basri Ket, a paladin from the plane of Amonkhet.

Basari Ket was a follower of Oketra, who gained his planeswalker spark during a “moment of pure elation” while completing the Trial of Solidarity, according to narrative designer Gerritt Turner. The new MTG planeswalker’s magic has the appearance of swirling sand that beefs up the power of others. He accomplishes this in Core Set 2021 by creating 1/1 tokens and adding +1/+1 counters on target creatures.

Five of the six planeswalkers in the M21 set, like Basari Ket, have three supporting cards of different rarity per the color they represent. Basri Ket supports themes associated with White by applying +1/+1 counters to creatures (and tokens) while creating a go-wide battlefield with tokens.

Basri’s Lieutenant is the Rare card in the Basri vertical cycle found in M21. He has protection from Multicolored and Vigilance with 3/4 stats. Basri’s Lieutenant also has an enter-the-battlefield ability and a death trigger that support decks crafted around Basari Ket.

The Uncommon in the Basri vertical cycle in the M21 set is a sorcery spell, Basri’s Solidarity. At the cost of two mana, one White, it places a +1/+1 counter on each creature you control.

Basri’s Acolyte is a unique Common within the vertical cycle in that it’s a Cat cleric with Lifelink. Four mana for a 2/3 is decent, but the acolyte also places +1/+1 counters on up to two other target creatures you control when it enters the battlefield.

The M21 set is scheduled to have a digital release on June 25 and an official launch via tabletop on July 3.