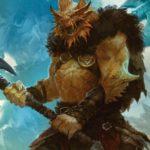 Art and character descriptions for the four legendary Creatures at the helm of the Dungeons & Dragons: Adventures in the Forgotten Realms Commander decks were revealed today on Good Morning Magic.

Gavin Verhey, game designer at Wizards of the Coast, introduced four of the Commanders that will be added in the upcoming set’s precons. Every day this week, Verhey will have preview videos for Adventures in the Forgotten Realms on Good Morning Magic.

Each Commander is one of two legendary Creatures that can pilot the deck. The group revealed today features the “heroes” who are in an adventuring party together. The other four possible Commanders will be “monsters” in the deck’s color identity.

Each Commander precon is scheduled to be revealed on July 2.

Prosper, Tome-Bound is the face-Commander of the R/B Planar Portals list. The Warlock uses The Book of Shadows that contains his greatest secrets and powers. MTGGoldfish will show off the deck.

Sefris of the Hidden Ways is the face of the U/B/W Dungeons of Death deck. Her specialty is in necromancy and Verhey said “her magic can sustain life and end it.” Expect reanimation effects in this precon that will be revealed by MTG Muddstah.

Galea, Kindler of Hope is a new G/W/U Commander in the Aura of Courage deck. This Bant deck will be previewed by The Command Zone.

Verhey ended the video with a dozen hints about the new cards in the 99 of these Commander precons. Here are each of Verhey’s hints.

Adventures in the Forgotten Realms previews begin tomorrow and go through the week. Return on June 30 for the exclusive Dot Esports preview card.

The D&D crossover set will be released digitally on July 8 with a full tabletop launch set for July 23.