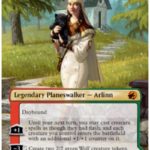 Arlinn is returning to Magic: The Gathering within Innistrad: Midnight Hunt, a Standard-legal set showcasing the werewolves of her home plane.

First introduced to Magic in Shadows over Innistrad, Arlinn Kord is a mage and a werewolf who’s a planeswalker. Able to maintain her human senses in werewolf form, the planeswalker utilizes her wolf powers for the good of all lycanthropes. Arlinn appeared in War of the Spark as a planeswalker caught up in the war on Ravnica and is now the face of Innistrad: Midnight Hunt (MID) as a dual-faced card with the Daybound and Nightbound mechanic.

Likely to see a good amount of gameplay in wolf tribal builds, Arlinn, the Pack’s Hope can create a go-wide board quickly that’s pumped with +1/+1 counters. Should a player not cast any spells during their turn, Arlinn the Pack’s Hope becomes Arlinn, the Moon’s Fury.

Daybound and Nightbound affect all players in the game, not just the controller of Arlinn. Hitting an opponent with a 5/5 that has Trample, Indestructible, and Haste can create an early game advantage when Arlinn is ramped out earlier than turn four. The only downside to the night planeswalker is that a player can’t cast any spells for a turn in order for Arlinn, the Pack’s Hope to become Arlinn, the Moon’s Fury.

Arlinn in MID has a variety of card styles, including a borderless version that pays homage to her early days. Players can add Arlinn, the Pack’s Hope, and Arlinn, the Moon’s Fury to their collections when Innistrad: Midnight Hunt releases digitally on Sept. 16 and globally on Sept. 24.