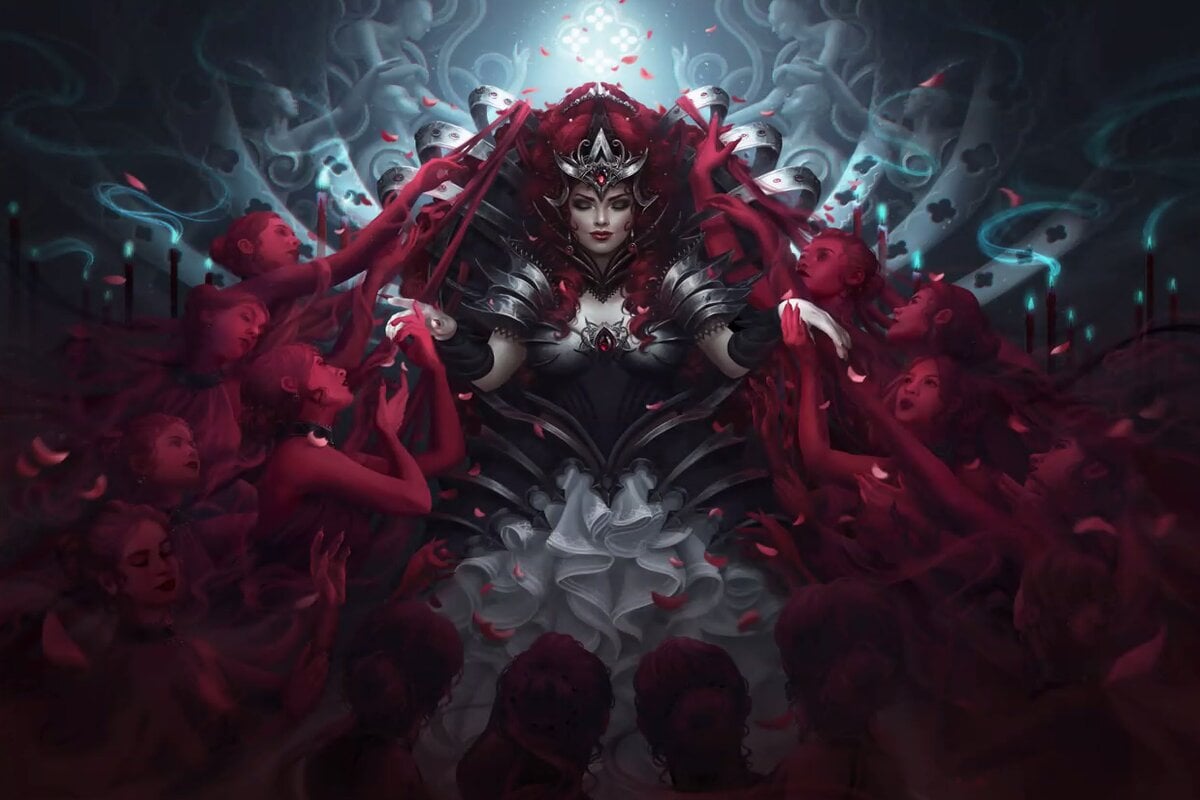 Artifacts in Magic: The Gathering typically don’t require any specific color of mana to cast. But on occasion, Wizards of the Coast will include some colored artifacts to spice up a set.

The cycle of five colored artifacts in Crimson Vow includes a few cards that are all about the special occasion taking place in Innistrad lore that is the wedding between the famous vampires Olivia Voldaren and Edgar Markov (who was formerly human).

While three of the cards are equipment cards, one is a vehicle and the other can transform into a creature.

Each color has one Uncommon artifact and all five cards cost either two or three mana.

Bride’s Gown is part of a lore pair with the Black artifact card Groom’s Finery. For two mana and with an equip cost of two, the equipment is extremely underwhelming.

Spending four mana in total to give one creature an extra two power means this isn’t strong unless you happen upon Groom’s Finery as well. Because that’s something you likely won’t get a chance to do in Limited formats, this card probably isn’t worth picking up in drafts.

The Blue artifact in Crimson Vow gives players some potential to control their draw and refuel your hand late in grindy games if you’re playing in a Limited format.

Soulcipher Board won’t be useful in Constructed formats, but it may be useful in Limited formats when you don’t want your draws on your turn to be as heavily reliant on the heart of the cards or random chance.

Similar to Bride’s Gown, this card is only useful if you also have the other. Giving the exact same benefits as Bride’s Gown in a vacuum, you’ll only want to use this in conjunction with Bride’s Gown.

This equipment, when played by itself, isn’t worth adding to your Limited or Constructed decks because it requires too much mana for not nearly enough benefit.

For three mana, the Honeymoon Hearse has the ability to be a strong vehicle in a pinch. Tapping two creatures to activate it as a creature might be difficult at times, but the 5/5 body with Trample may make it useful in some situations.

Ultimately, it’s not a card that you’ll want to pick early in a draft. But if you’re low on playables or need to fill out your curve, it could be a serviceable way to have a high-power threat late in a game.

This Green equipment isn’t overpowered, but it could give you an extra push late in games during your draft or sealed events.

Giving any creature +3/+3 is a strong move, and the added ability to sacrifice a Forest to give the creature Trample as well is both flavorful and effective at ending games.

Similar to Honeymoon Hearse, you won’t see this in Constructed play and won’t want to pick it up early in a draft, but it could serve as a respectable pick to fill out your deck.