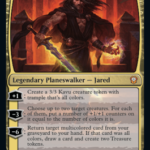 Magic: The Gathering’s upcoming fall set, Dominaria United, is releasing with two preconstructed decks, one of which is a five-color list.

“Painbow” is a five-color deck led by Jared Carthalion. It centers around playing with multi-colored Creatures and getting benefits from them. The collection of new spells is expensive and splashy.

While the cards are hard to cast, it’s made up for by raw power level from their abilities. Carthalion himself is a strong Planeswalker that can protect itself and have an immediate impact on the battlefield.

Including the commander, there are 10 new cards in the Painbow deck.

This is a powerful card that could be put in as the leader of Painbow.

In some ways, it’s a better option than Jared Carthalion. Since the deck is mostly multicolored spells, when Jenson is on the battlefield every spell lets you scry. If a spell is all colors it creates a 4/4 Angel. This card has everything. It provides card selection, token generation, and can help cast five-color spells.

This card will be one of the standouts from all of Dominaria United. Tiller Engine is a two-mana Artifact that has two abilities that trigger when a land enters the battlefield tapped. It can untap that land or tap a nonland permanent an opponent controls. This will fit in any multicolored Commander deck because most two-color lands enter tapped in low-to-mid power pods. In a ‘lands-matter’ deck, the second ability will take over the game by tapping down opposing blockers.

This ten-mana behemoth of a card does not want you to cheat it out. You must cast it otherwise it is exiled when it enters the battlefield. A 10/1 vigilance, trample, and lifelink threat is a strong body, and its leaves the battlefield trigger is decent. It lets you cast any number of spells from the top of your library with a total mana value of 10 or less.

It’s fine. Despite the exile trigger, Primeval Spawn is still a worthwhile reanimation target. Getting ten mana’s worth of cards off the top is a great trigger to hit off an Animate Dead.

Another expensive five-mana spell in the Painbow precon is Unite the Coalition. For 2WUBRG you may choose from a list of five modes. You get five choices and may choose the same mode more than once. These abilities are fine, but Unite the Coalition isn’t as good as a card like Planewide Celebration.

Each mode individually is useful, but there are cheaper and better options for every mode on Unite the Coalition. In a five-color deck, why not just run the best-in-class options? At seven mana, spells should greatly affect the battlefield or get you closer to winning. This barely accomplishes that.

Ur-Dragon players collectively gasped when Two-Headed Hellkite was revealed. This six-mana WUBRG Creature is great. It has flying, menace, and haste to almost guarantee it hits an opponent for five.

Whenever it attacks, you draw two cards. This has to be removed before it takes over the game. Drawing two cards every turn is more than enough value for a five-color Dragon deck to overwhelm the battlefield and win the game.

Obsidian Obelisk is a nice mana rock for the Painbow deck.

This will be one of the best cards in Painbow and should be a staple in multicolored decks going forward in Commander. An Enchantment that rewards you for doing what your deck already does is great. The extra damage over the course of several turns will add up.

Note that it deals damage to any target.

Mana Cannons can be a source of Creature and player removal.

Iridian Maelstrom is an incredibly narrow board wipe. In Painbow it’ll be a solid card. A five-mana wipe isn’t bad. However, this isn’t better than the many other board wipes you can run. Ideally, Iridian Maelstrom would be a one-sided wipe, but that’s not guaranteed. Even the precon doesn’t run that many Creatures that are all colors. There will be times this is just a total reset, which is fine, but with such a restrictive mana cost you’d expect more.

Fallaji Wayfarer is one of the new cards that fit in many different decks. This card can be used in any deck running Green despite being all colors. The “all colors” ability does not affect the color identity of Fallaji Wayfarer.

This is a great option to help cast expensive multicolored Creatures with convoke. Fallaji Wayfarer will be best in a go-wide list, but there’s still value to be had with just reducing the cost of a Creature by one or two.