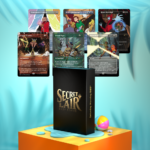 Summer is underway and Wizards of the Coast is bringing Magic: The Gathering fans a new Secret Lair superdrop with eight collections featuring artist-centric drops.

The “All Natural, Totally Refreshing” superdrop pre-orders will take place from June 21 to July 23 and will officially be released on Sept. 23. Each drop comes in a foil and non-foil version. The non-foil editions go for $29.99, while the foils will run you $39.99.

This superdrop has three deals that include everything. The “Totally Refreshing Non-Foil Bundle” includes every drop in non-foil for $199.99. You can pick up each foil in the $269.99 “All-Natural Foil Bundle.”

Here’s each new drop and what cards they include.

In celebration of Mother’s Day, this drop contains four copies of Mother of Runes featuring distinct artwork from different artists. Ejiwa Ebenebe, Livia Prima, Eliette Mitchell, and Rebecca Guay give their interpretations to Mother of Runes.

The drop is notable as Guay’s return to Magic art. Guay’s art is found throughout Magic’s history, including cards like Enchanted Evening and Enchantress’s Presence.

Dan Frazier’s art in Magic dates all the way back to Alpha. His work contributed to the distinct look found in some of Magic’s oldest cards. There are two drops that showcase his art that reimagine the Ravnican allied and enemy signets.

A vintage art style alongside the old frame treatment makes these Commander staples look like they were taken straight from 1994.

One part alternate art, one part Magic Rosetta Stone, this drop contains one copy of each Phyrexian Praetor written in Phyrexian. Prior to this drop, there were three cards that were in Phyrexian.

Elesh Norn, Grand Cenobite and a Phyrexian Swamp were the first two cards with text in the in-universe language. The release of Kaldheim brought players a Phyrexian version of Vorinclex, Monstrous Raider.

To further scratch the comic itch, the “Special Guest: Fiona Staples” drop reimagines five cards, many of which are playable in 60-card competitive formats like Modern. Fiona Staples is best known for her award-winning work on Saga, a comic series published by Image Comics.

Mark Poole did the art for some of Magic’s best and most played cards. This drop includes five classic spells with a mix of original art and old art that’s given the modern frame treatment.

The drop includes Counterspell, Howling Mine, and Birds of Paradise with their classic art set in a modern frame. Balance, Brainstorm, and Wasteland are getting new alternate art illustrated by Poole.

There was a Dungeons & Dragons cartoon that aired in the ’80s and this Secret Lair is an ode to that show. The “Saturday Morning D&D” brings the distinctive style of the cartoon to Commander’s Sphere, Hero’s Downfall, Impact Tremors, Primal Vigor, Unbreakable Formation, and Whir of Invention.

The nostalgic art is illustrated by Tyler Walpole, who was tasked with capturing the feel of the show. The drop coincides with the release of the D&D crossover set Adventures in the Forgotten Realms in July.