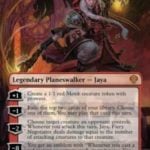 A total of five Magic: The Gathering planeswalkers are in the Dominaria United set, but not all of them are fighting against the Phyrexians.

The release of Dominaria United (DMU) on Sept. 9 will bring four planeswalkers to the Standard format in one set. That’s one more than SNC, MID, and VOW—and equal to NEO. Similar to Kamigawa: Neon Dynasty, the Dominaria set contains a planeswalker that has been Compleated. And one is a reprint from Innistrad.

Having lived for around 1,600 years and originally from the plane of Dominaria, Jaya’s story and life came to end during the events of Dominaria United. Her final planeswalker card, Jaya, Fiery Negotiator, pays tribute to her power and skills.

Jaya enters the battlefield with a starting loyalty counter of four and has four loyalty abilities. Her plus-one creates a 1/1 Red monk token with Prowess, a mechanic from Kans of Tarkir that has a creature gain +1/+1 until the end of the turn whenever a non-creature spell is cast by its controller.

Her minus-one ability provides card advantage and her minus-two deals damage equal to the number of attacking creatures to a target creature.

Jaya, Fiery Negotiator’s ultimate is a minus-eight that gives her controller an emblem that copies a Red Instant or Sorcery spell twice upon casting it.

Despite falling to the Phyrexians during the invasion of Dominaria, the DMU Ajani, Sleeper Agent planeswalker functions similar to past Ajani’s. The two exceptions are his mana cost, containing either a hybrid or Phyrexian cost, and Ajani’s ultimate.

Starting with a loyalty count of four, Ajani’s plus-one provides card advantage while his minus-three dishes out +1/+1 counters and the Vigilance keyword to up to three targets. Should a player cast the Ajani, Sleeper Agent ultimate, they’ll get an emblem that plants Poison counters every time they cast a creature or planeswalker spell.

Liliana of the Veil is a reprint of her planeswalker card from Innistrad. A staple in multiple Magic formats, she has a starting loyalty of three. Liliana’s plus-one forces each player to discard a card while her minus-two has a target player sacrifice a creature. The Liliana of the Viel minus-six ultimate separates a target player’s permanents into two piles, forcing them to sacrifice every permanent in one of the piles.

Created by Urza and Barrin, Karn is originally from the Dominaria plane. Karn supports Artifacts through all his MTG planeswalker cards, including the DMU Karn, Living Legacy.

Karn, Living Legacy enters the battlefield with a total loyalty of four. His plus-one creates a tapped Powerstone token, an artifact that creates colorless mana upon tapping. Karn’s minus-one provides card advantage. And the ultimate for Karn, Living Legacy creates an emblem that deals one damage to any target upon tapping an untapped Artifact you control.