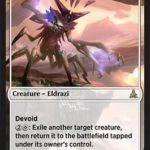 Wizards of the Coast continues to add Magic: The Gathering cards to the Explorer format pool in MTG Arena, bringing the format closer to a digital representation of the Pioneer format with a second Explorer Anthology set.

Scheduled to release on Tuesday, Dec. 13, the second MTG Arena Explorer Anthology set will include a total of 24 cards that exist in tabletop gameplay but hadn’t been added to digital yet. The Explorer format will eventually turn into the digital version of the Pioneer format, through expansion releases like Anthology.

Included in the second MTG Arena Explorer Anthology set are Wastes, a basic land type that was first printed through Oath of the Gatewatch and tap for colorless mana. Wastes can get played with Eldrazi, like the Eldrazi Displacer that’s in the new Anthology set. Other popular cards include Thought-Knot Seer, the land Mutavault, and World Breaker.

All of the cards within the second Explorer Anthology are included in a bundle, found in the MTG Arena store from Dec. 13 to March 7.

Players will not be able to craft any of the new Anthology cards with Wildcards until after March 7. The bundle includes four copies of every card and is priced at 4,000 gems or 25,000 gold.

Players can use the Explorer Anthology cards in either the Explorer or Historic formats. All cards in the set are reprints of existing Magic cards that weren’t previously available on MTG Arena. All cards will get uploaded to MTG Arena on Dec. 13.