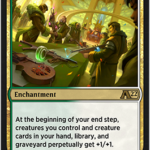 A total of 30 new digital-only Magic: The Gathering Arena cards via the Alchemy: New Capenna expansion will release in June, containing a variety of cards to spice up the Alchemy and Historic formats.

Scheduled to release on June 2, the Alchemy: New Capenna expansion contains three cards in each of the five MTG colors and 15 multicolored cards. Five of the 30 total cards within the MTG Arena expansion feature the returning digital-only Spellbook mechanic, along with Seek. The set also features a higher number of Uncommon rarity monocolored cards, making it easier to upgrade existing decks. All the multicolor cards have a rarity of Mythic Rare or Rare. 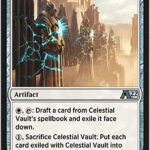 Of the thee White A:22 cards, Celestial Vault has sleeper potential against Midrange and Control decks containing board wipes. Using the Spellbook mechanic, players can draft cards from the spellbook once per turn and then place all exiled Spellbook cards in hand upon sacrificing Celestial Vault. All three Alchemy: New Capenna cards in the color White support Angel tribal builds. 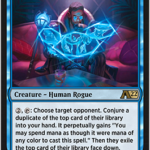 The three Blue A:22 cards provide utility, from stealing your opponent’s cards off the top of their library to bouncing nonland permanents with a creature that has Flash. And Choice of Fortunes puts a new spin on Seek, allowing players to essentially mulligan the first Seek options if they want. 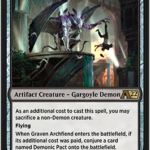 Sacrifice is the theme of the A:22 Black cards, with Xander’s Wake containing a good amount of potential to shake up the Alchemy and Historic meta. The two-drop Enchantment lets its controller draft a card from its spellbook once per turn when a creature dies. And the cards in the Spellbook all synergize with Sacrifice tribal decks.

Graven Archfiend is also an interesting, yet expensive creature, who conjures Demonic Pact to the battlefield if a non-demon was sacrificed as an additional cost when casting. 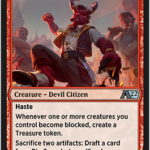 The A:22 cards in the color Red are all about aggressive gameplay, Sacrifice, and burn damage. Pass the Torch has some potential, able to Perpetually give a creature card in hand the ability to deal two damage to any target upon dealing combat damage via Pass the Torch. And Big Spender pops out Treasure tokens whenever a creature you control is blocked while also having a Spellbook that is accessed via sacrificing two Artifacts. 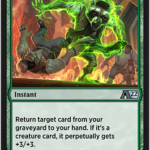 Each of the three Green A:22 cards has a unique spin on existing MTG mechanics. Loose in the park draws a card upon ETB and can transform a basic land into a creature via its Spellbook and ability. Menagerie Curator provides ramp and card draw. And Giant Regrowth returns a card from your graveyard while Perpetually giving it +3/+3 stats.

There are a total of 15 multicolor A:22 cards. All have a rarity of either Mythic Rare or Rare. Back-Alley Gardner stands out by having lands enter the battlefield tapped via Alliance. Rope Line Attendant provides some much-needed go-wide synergy to Citizen tribal decks.

Spara’s Bodyguard is a versatile three-drop that provides Shield Counters to creatures in your hand. And Arming Gala is an expensive Enchantment that Perpetually pumps all creature cards (whether in hand, graveyard, library, or battlefield) +1/+1.