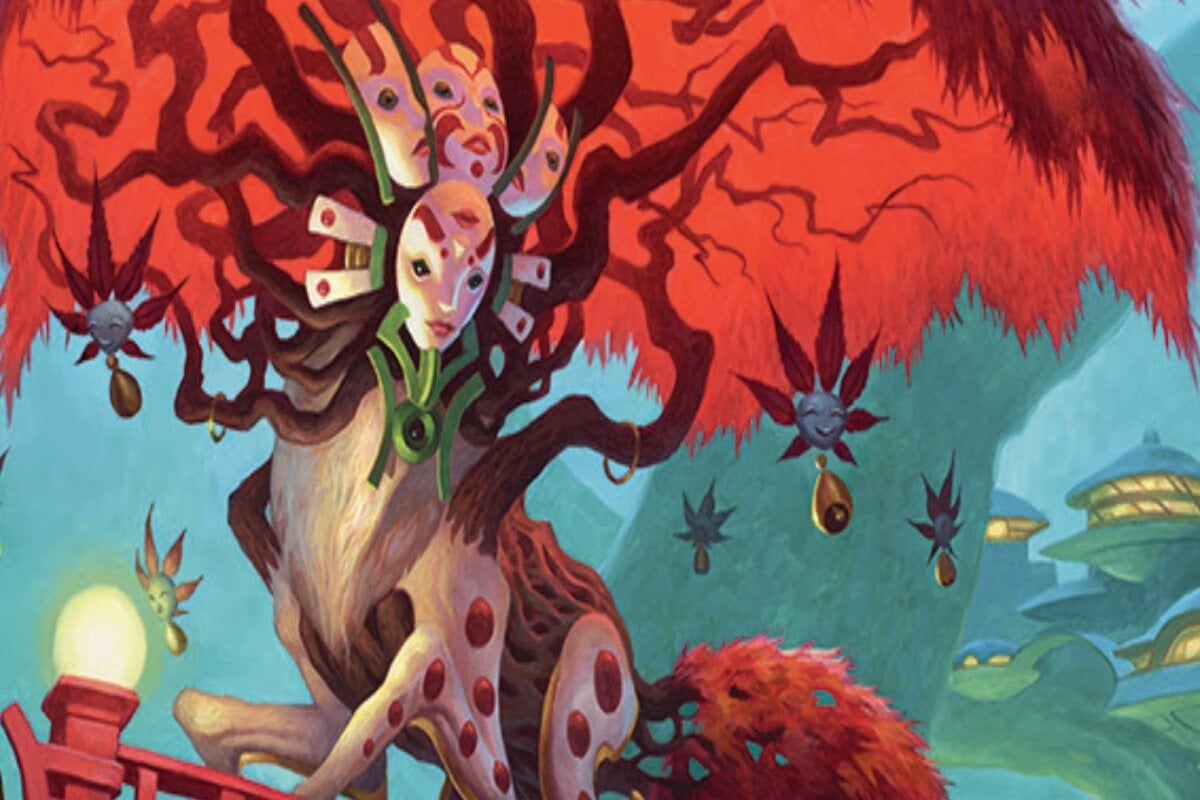 Shrines in MTG were introduced with the set Champions of Kamigawa, so it’s only appropriate that a return to the plane with the set Kamigawa: Neon Dynasty will bring forth a new cycle of shrine cards.

Shrines have historically been Legendary Enchantment cards, but the Go-Shintai cycle in the newest MTG set adds a new element to the cards. This time around, the cards are also creatures.

There are six shrines in the set in total. Five of them are uncommon and represent each of the five colors creating a cycle. One of them is Green but has an activated ability that requires all five colors and is of Mythic Rare quality.

All of the Go-Shintai have an ability that activates during your end step and requires you to pay one generic mana. They all have effects that scale with the number of shrines you control, too. They also all have one static keyword ability.

Here are all of the Go-Shintai shrines in MTG’s Kamigawa: Neon Dynasty.

The White Shrine is a more defensive creature that might not provide immense value. It’s a 1/3 body with Vigilance but costs four mana. Its Endstep ability has the potential to be powerful if you control multiple shrines, but that will likely only be the case if you’re running a shrine deck in a format like Historic or Modern.

The Blue Shrine is a card you might want to put in a durdling defensive deck. With a 0/4 body, the creature has flying and will be difficult for opponents to attack around. The Endstep ability of the creature is fairly underwhelming when you realize that it likely won’t force players to mill more than one or two cards.

While you might think that the card could be used in a mill deck, there are too many alternatives that force opponents to mill significantly more cards.

For four mana, this 2/2 with Deathtouch could be useful against decks that have creatures with few high toughness threats. The card’s Endstep effect will only be useful in situations where your opponent has creatures with one to two toughness more than likely, but there are a decent number of decks that have that. That being said, its cost of four mana is probably more than what you want in any constructed format.

The Red shrine might be the best card in the cycle in a vacuum. For three mana, its 2/2 body with First Strike is playable in Limited formats. Add in the fact that every Endstep you can pay one mana to deal an extra damage to your opponent. You likely won’t be able to get more than one damage a turn from the ability unless you’re running a shrine deck, and in those decks specifically, Ancient Wars will have a high potential to end games in just a couple of turns.

The Green shrine is another card that’s a contender for best in the cycle. For just two mana, the 1/1 with Trample may seem odd, but its Endstep ability could take over games in the right deck.

Paying one mana to put a +1/+1 counter on a shrine you control every turn could make Boundless Vigor a formidable threat in Limited formats. But it likely won’t see much play in constructed formats.