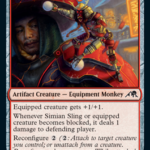 The color Red in Kamigawa: Neon Dynasty gives its archetypes cheap, aggressive Creatures and spells that apply pressure early and pave the way for bombs to finish the game.

Red is a key color in the Limited format’s Artifact-based strategies. There are 10 Red Artifacts at Common and Uncommon in Neon Dynasty. The color also provides several strong Creatures that are good candidates to attack alone in Samurai strategies or become modified. Here are the different two-color archetypes Red fits into.

There’s a chance that Red will be one of the strongest colors in Neon Dynasty Limited due to its package of excellent removal spells. Twinshot Sniper, Kami’s Flare, and Flame Discharge are powerful removal pieces that can shut down an opponent’s gameplan by eliminating key utility Creatures or bombs.

Here are the best Red Common and Uncommon cards for Neon Dynasty Limited.

This three-mana Instant is a solid way to end the game at Common. G/R decks in Limited want to swing in with threatening modified Creatures. Ambitious Assault punishes the opponent for not blocking an alpha attack. This is a good way to surprise the opponent.

Dragonspark Reactor is another way for Red decks to deal that last bit of damage to finish the game. There are plenty of Artifacts in Neon Dynasty to give Dragonspark Reactor counters. The card isn’t very strong when played in the late game, but it is an Artifact that can trigger the abilities of other cards for two mana. As an early-game play, however, Dragonspark Reactor represents potential damage directly to the opponent or a removal spell.

This X-cost spell is removal that scales with the opponent’s battlefield that hits both Creatures and Planeswalkers. Flame Discharge is a great option for Red decks looking for removal, and at Instant speed, it doesn’t get much better than this Uncommon. It gets even better in decks running ways to modify Creatures by adding additional damage to the ability.

This is the bread-and-butter removal spell in Red. Kami’s Flare is a Lightning Strike with an upside if you control a modified Creature. The extra two damage to the opponent is relevant because Red decks want to finish the game quickly. This is the best piece of Common removal available in Red.

Samurai and Warrior decks in Limited want to attack with a single Creature each combat to gain various effects. The problem with this strategy is that it can be difficult to have a meaningful combat step with one Creature. Opponents can certainly just chump block all game and stop damage from getting through.

Peerless Samurai can force difficult blocks with its Menace keyword, making it much harder to chump block. The ability to make the next spell you cast cheaper is a good way to get a tempo advantage or surprise the opponent with a combat trick before the damage step.

The one-drop Creature with Haste is a staple of Magic: The Gathering sets nowadays. Each iteration of this card generally is tailored to the set’s core theme in Red. Rabbit Battery is a strong one-drop that scales well into the late game, something one-mana red cards aren’t always able to do.

Rabbit Battery is an Artifact Creature that can give Creatures haste by using its Reconfigure ability to attach to them the turn they’re played. This is a great way to keep the pressure on the opponent and force action in the combat step.

Twinshot Sniper is an incredible Uncommon. This 2/3 with Reach enters the battlefield and shocks any target. You can also use its Channel ability early to deal two damage to an opponent’s important Creature in the early game.

This card does so much and getting two damage stapled onto an already solid body makes Twinshot Sniper one of the best cards in Neon Dynasty Limited.

Simian Sling is another example of a typical Red card that gets better with Reconfigure. Generally, Creatures with Simian Sling’s ability to punish blocking is useful early but quickly become irrelevant as the game develops.

Being able to Reconfigure Simian Sling onto a better Creature and give it the ability is a good way for the card to retain value past turn four. The two-mana Reconfigure cost makes it easy to move Simian Sling around the battlefield to different Creatures.