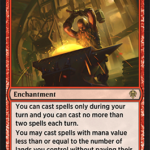 A total of 17 MTG Arena digital-only cards in the Alchemy and Historic formats were hit with balance changes after the launch of Kamigawa: Neon Dynasty, improving zombie tribal themes while also unbanning Fires of Invention.

The 17 buffs and nerfs applied to the Alchemy and Historic formats are a prelude to new digital-only MTG Arena cards that are expected to arrive around six weeks after the launch of Kamigawa: Neon Nights (NEO). All adjustments went live on Feb. 24, hitting overpowered cards like Town-Razer Tyrant, unbanning Fires of Invention, and improving zombie tribal themes within both digital MTG formats.

Here are the 17 nerfs and buffs applied to MTG Arena cards within the Alchemy and Historic formats via WotC.