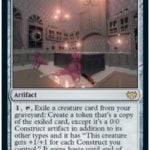 Bombs are shaping the Innistrad: Crimson Vow Limited Magic: The Gathering format, especially within colors that support them.

Unlike recent Magic Limited formats, the Innistrad: Crimson Vow (VOW) Limited format is bomb heavy. Bombs will pull a player into a specific color or color pair, dominating during matchups against archetypes that don’t have a bomb or players who haven’t drawn their bomb yet. The colors Black and Red are the strongest within the VOW Limited format, with removal being a top pick in Draft due to the number of bombs.

From Artifacts and Enchantments to vampires and maids, here are the top 13 VOW bombs within Draft and Sealed.

Having a board presence is very important within the VOW Limited format. Stensia Uprising creates a 1/1 token at the start of every end step, creating chump blockers against Aggro heavy builds like BR. The Enchantment can also deal seven damage to any target as a bonus if you have exactly 13 permanents. 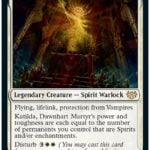 Lifegain BW decks are very powerful within VOW Limited, with Katilda, Dawnhart Martyr taking the build to another level. The spirit warlock has protection against vampires, which is important since RB is a popular archetype. And Katilda can return to the battlefield as an Enchantment via Katilda’s Rising Dawn. 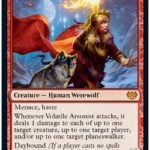 Volatile Arsonist is a five-drop Mythic Rare in Red with Menace and Haste. The human werewolf can also deal one damage up to multiple sources when it attacks. And when it transforms into Dire-Strain Anarchist, it can deal up to two damage.

Sigarda’s Summons is one of the best finishers in the color White. Any creature you have with a counter turns into an angel with 4/4 baseline stats and has Flying.

Versatility has Anje, Maid of Dishonor standing out as a top bomb in the MTG colors Black and Red. The vampire has 4/5 baseline stats as a four-drop and creates a Blood token upon entering the battlefield. Anje fuels card advantage via the Blood token. The vampire can also gain its controller two life while stealing two life from an opponent for sacrificing a Blood token or creature.

If the 7/8 stats on Hullbreaker Horror don’t finish off an opponent, its abilities will. The Kraken horror can’t get countered and can be returned to your hand by casting a spell if an opponent tries to remove it. Any other spells you cast will return an opponent’s creature to their hand, clearing a path for Hullbreaker Horror to hit for seven damage.

Spells matter in UR is on the rise in VOW Limited, with Manaform Hellkite being a reason to play the archetype. The dragon can drop as early as turn four, creating a token with Flying and Haste based on the amount of mana spent to cast a noncreature spell. The token goes away during your end step, but that won’t matter if spells are getting cast each turn.

Synergizing perfectly with Blood tokens, Olivia, Crimson Bride reanimates a creature to the battlefield upon attacking. Ditching high-mana powerful creatures into your graveyard while gaining card advantage with Blood tokens can end games when Olivia brings them back onto the battlefield attacking with her. Olivia, Crimson Bride also synergizes nicely with Anje, Maid of Dishonor, as the vampire will not go away after attacking due to being a legendary creature.

Halana and Alena Partners is a powerful addition to one of the strongest archetypes in VOW. The legendary human ranger has First Strike and Reach. Halana and Alena, Partners can also pump a target creature each turn and give it Haste.

Hating on Aggro and go-wide boards is Toxrill, the Corrosive. Creatures your opponent controls decrease in power and toughness each turn by one. And whenever one of those creatures dies, you gain a 1/1 token. The slug horror can even provide its controller card advantage if it’s about to get removed for a cost of UB. 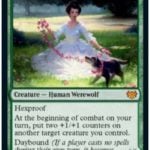 Removal has a hard time removing Avabruck Caretaker due to it having Hexproof. The human werewolf also provides two +1/+1 counters to a creature you control at the start of each combat. And when Avabruck transforms into Hollowhenge Huntmaster, all your creatures have Hexproof and she continues to hand out counters at the start of combat each turn as a 6/6.