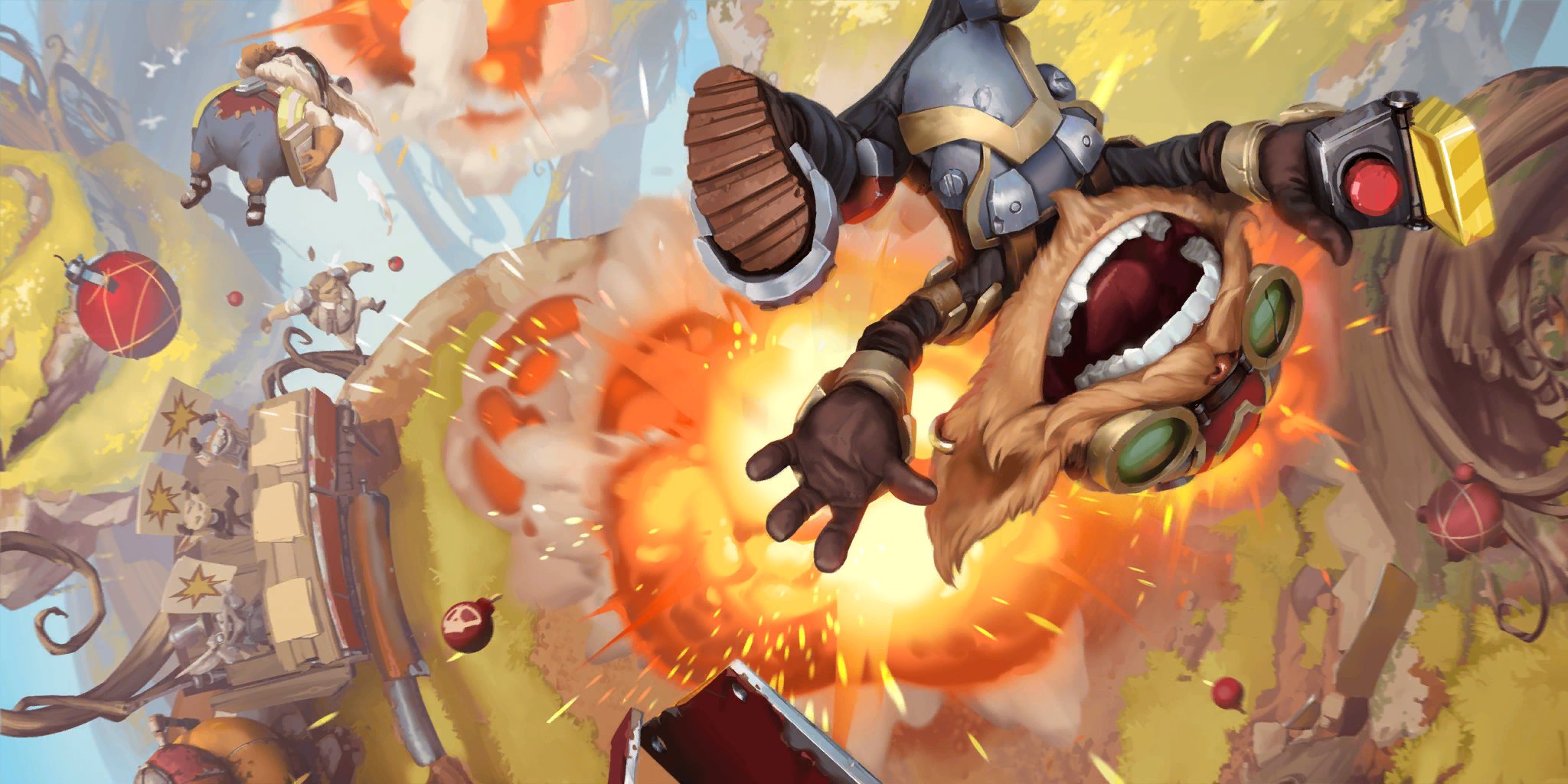 Legends of Runeterra: Beyond the Bandlewood’s reveal season has reached its final day. And today, Riot Games introduced the final champion joining the newest set: Ziggs.

Ziggs is a dual-region champion that focuses on dealing massive damage and destroying your Landmarks, similar to Xerath, who was revealed yesterday. 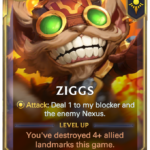 Ziggs is a three-mana yordle champion with 3/4 combat stats and a skill that activates when he attacks, which deals one damage to anyone blocking him and the enemy Nexus. Ziggs levels up after you destroy four allied Landmarks throughout the game.

Ziggs’ second level improves his skill’s damage by increasing it to two. In addition to his level one skill’s damage being amplified, Ziggs gains a new ability that deals two damage to the enemy Nexus whenever a Landmark you control is destroyed. 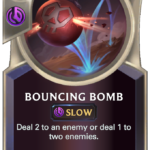 Bouncing Bomb is a common three-mana slow spell that lets you either deal two damage to one enemy unit or deal one to two different enemies.

Explosive Minefield is a common one-mana Landmark that stuns the strongest enemy when it’s summoned or destroyed.

Inventive Chemist is a common one-mana 2/1 yordle unit with a summon ability that summons a Scrappy Bomb. The created Scrappy Bomb is an uncollectible one-mana Landmark with an ability that activates after counting down for three rounds or when it’s destroyed, dealing one damage to the enemy Nexus.

Yordle Contraption is a common five-mana slow spell that lets you destroy any Landmark or create two random multi-region followers in your hand.

Mega Inferno Bomb is a seven-mana rare burst spell that deals one damage to all enemy units and then does another single point of damage again immediately after.

Safety Inspector is a rare six-mana 6/6 yordle unit with an ability that activates at Round Start which creates an “Inspection Passed” in your hand. The Inspection Passed is a fleeting zero-mana slow spell that destroys an allied Landmark to deal three damage to anything.

The Arsenal is an epic eight-mana 8/6 yordle unit with an ability that gives him a random keyword for each allied Landmark you’ve destroyed throughout the game.

Bomber Twins is a common two-mana yordle unit from Bandle City and Shurima with 3/2 stats and a summon ability that creates a random Landmark in your hand that costs two mana or less.

When compared to Xerath, Ziggs has more general use and is safer due to his fair stat line for his cost and his skill that always activates whenever he declares an attack. Being able to deal a point of damage to his blocker and the enemy Nexus lets him deal four damage unblocked or remove any chump blocking unit the opponent may throw away.

Once Ziggs levels up, you’ll be able to deal even more damage to the enemy Nexus whenever your Landmarks are destroyed. While destroying Landmarks in quick succession can be a difficult task, being able to activate his ability a few times will be a great amount of burn damage already.

Even if you fail to ever level up Ziggs, his level one form alone is already an efficient unit if you just look at stats and abilities for his mana.

Bouncing Bomb, Ziggs’ champion spell, gives Bandle City more potential removal options that can either deal damage to multiple threats or remove a moderately sized threat. While the slow speed of Bouncing Bomb is a notable weakness, if you control the upcoming Senna, you have the chance to accelerate its speed to fast, making it a more formidable removal spell.

Inventive Chemist is another one-mana unit for Bandle City that helps you contest the early board and gives fuel to assist in leveling up Ziggs and Xerath. Aside from these two new champions relying on Landmark cards, previous Landmark-reliant champions like Taliyah and Malphite may have a chance to benefit from some of the upcoming cards.

Ziggs will be joining the Shurima and Bandle City champion roster when LoR: Beyond the Bandlewood is released tomorrow, Aug. 25.