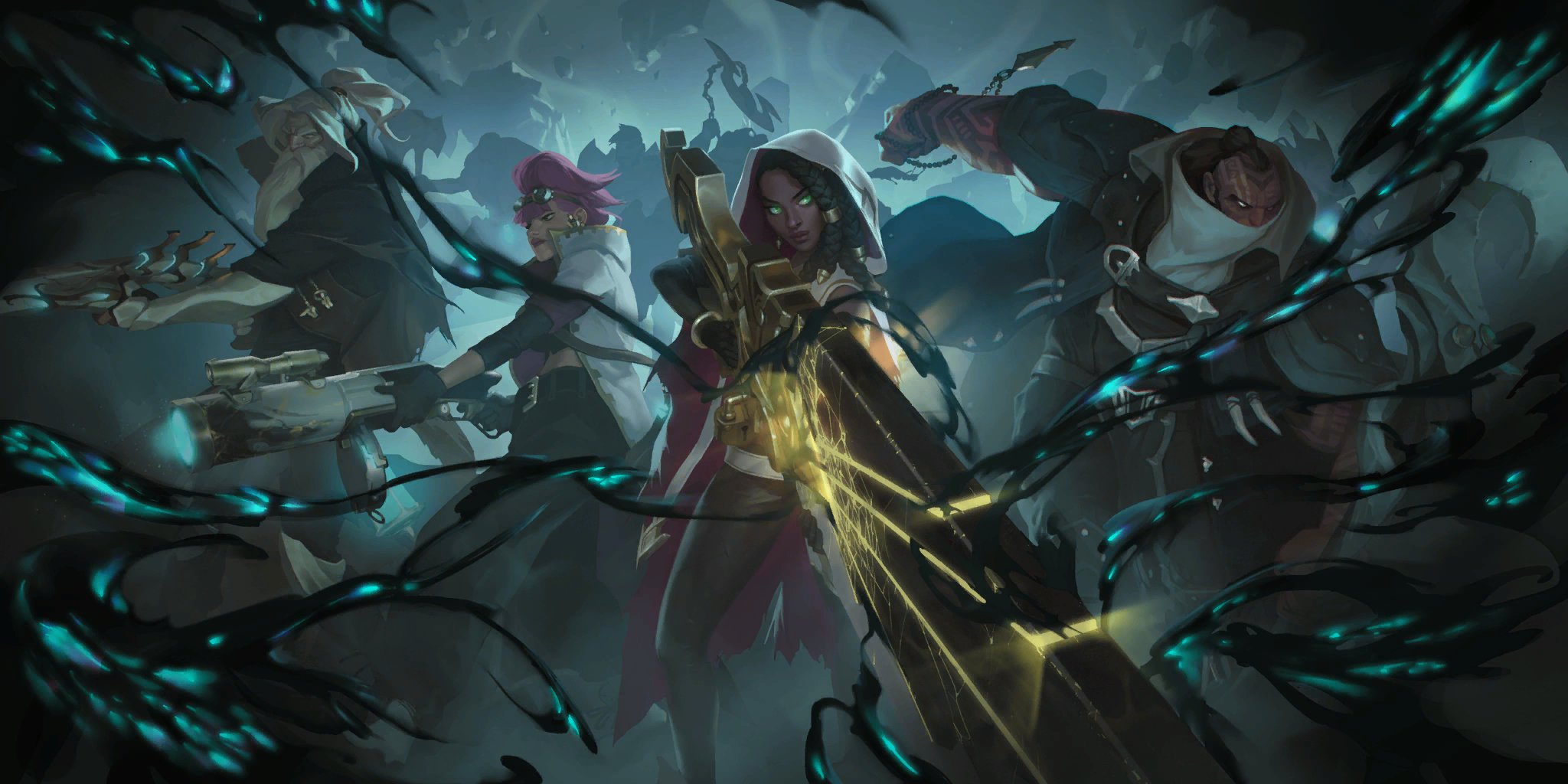 Senna is the fourth champion coming to Legends of Runeterra in the game’s upcoming set, Beyond the Bandlewood—and she’s breaking the conventional rules of the game wide open.

Senna is a five-mana champion from the Shadow Isles with 4/4 combat stats, the Quick Attack keyword, and an ability that generates Darkness when she’s summoned or attacks if you don’t already have the spell. Darkness is an uncollectible three-mana slow spell that deals two damage to an enemy unit. 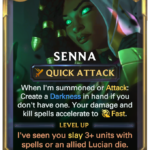 In addition, she has an aura ability that breaks the boundaries of LoR’s rules. While Senna is on the board, any slow speed spell that damages or kills units becomes fast speed. Senna levels up when she sees you slay three units with spells or if an allied Lucian has died.

Once Senna reaches her second level, she gains +1/+1 in combat stats and retains all previous abilities. And when you control Senna while she’s level two, all of your spells that damage or kill units have their mana cost reduced by one in addition to having their speed accelerated to fast.

Dawning Shadow, Senna’s champion spell, is a slow seven-mana spell from the Shadow Isles that kills an enemy unit and gives all enemies a -2/-0 stat debuff for the round.

Piercing Darkness is a common six-mana slow spell from the Shadow Isles that Drains five from a unit.

Demacia Sentinel is a common one-mana unit from the Shadow Isles with a 1/2 stat line, Fearsome keyword, and an ability that triggers the first time you slay a unit with a spell, granting her a permanent +2/+1 stat increase.

Buhru Sentinel is a common three-mana unit from the Shadow Isles with 3/3 stats and the same ability as Demacia Sentinel, which gives him a +2/+1 stat increase the first time he sees you slay a unit with a spell.

Solari Sentinel is a common three-mana unit from the Shadow Isles with 3/2 stats and an ability that’s similar to the Darkbulb Acolyte revealed yesterday, which has her generate a Darkness when summoned if you don’t already have one.

Watcher on the Isles is a rare four-mana unit from the Shadow Isles with 2/4 stats and an aura ability that triggers once each round. The first time you slay a unit with a spell, two damage is dealt to the enemy Nexus.

Mistkeepers is a rare five-mana 3/4 unit from the Shadow Isles that summons an Ephemeral Mistwraith the first time you slay a unit with a spell each round.

Ixtali Sentinel is a rare six-mana unit from the Shadow Isles with 4/5 stats, the Lifesteal keyword, and a summon ability that creates a Darkness in your hand if you don’t already have one. In addition, the next Darkness you play within the same round she’s summoned, an exact copy will be cast and target the enemy Nexus.

Dess & Ada, who appeared in the Sentinels of Light visual novel in League of Legends, is an epic eight-mana 7/6 unit from the Shadow Isles with an ability that creates a Darkness on summon if you don’t already have one. And similar to the Ixtali Sentinel, it will empower the next Darkness you cast this round, making it cost zero and dealing two damage to all enemies.

Catalogue of Regrets is an epic four-mana Shadow Isles Landmark that has a round start ability which creates a Fleeting copy of a non-Fleeting spell you cast last round in hand.

Contrasting Veigar’s reveal, who uses the Darkness to scale up its damage with the help of Bandle City, Senna provides utility to the uncollectible spell with the help of the Shadow Isles. Senna herself shatters a fundamental game convention by altering the speed of your spells from slow to fast. This ability allows her to make the opponent worry about answers that have never existed within LoR’s history. Even open attacks can be punished by slow spells thanks to Senna.

Compared to every other card that generates Darkness, Senna is the one that can perform that action more than once on the same board thanks to her attack ability. While Veigar can generate Darkness at the start of each round, that can only be achieved when he reaches his second level.

Senna is most likely bound to find play with Bandle City and Veigar since that region holds more Darkness activators. But thanks to Senna’s acceleration aura, there’s a slight chance she can find play independent of Veigar in regions like Piltover and Zaun as a tool for control to help boost the potency of your slow spells.

Despite being a slow spell, Dawning Shadow will most likely find play as its champion spell form. This effectively means Senna’s ability will make it a better Vengeance under most circumstances.

Senna’s followers can be split into two categories: those that generate Darkness and can potentially alter it and ones that empower themselves after seeing units get slain by spells.

Demacian Sentinel is comparable to Shurima’s Baccai Reaper, who can empower themselves but to an upward limit. While the Sentinel can only become a 3/3, being able to do that at one mana can make opponents spend disproportionate amounts of removal to prevent that from happening.

While the Demacian Sentinel will most likely find a home with Senna, there’s a healthy chance that she can make her way into midrange and control decks outside of Darkness-based builds.

Buhru Sentinel is exactly the same as Demacian Sentinel except he has his stats and mana increased to 3/3 and three. Players are given the liberty to mix and match between the amount of these two Sentinels they want in their list to overrun the opponent early.

Piercing Darkness is a strong value control spell that can remove a midrange threat while healing you for five. While the slow speed is debilitating for its viablity, Senna’s acceleration effect gives Piercing Darkness a chance to find play.

Solari Sentinel is less impressive when compared to Darkbulb Acolyte since she requires an extra mana to be played, which matters a ton when relying on card creation abilities like hers. Despite this weakness, she still is most likely bound to find play to improve the consistency at which you can find Darkness.

Ixtali Sentinel can empower your Darkness in a valuable way by letting your Darkness burn the opponent while removing one of their threatening units. Outside of her useful ability, her Lifesteal can give controlling Shadow Isles lists a chance to stabilize. In the rare circumstance where you control Grand Overseer Veigar and Ixtali Sentinel and you use the Darkness to target the enemy Nexus, you’ll effectively cast twice, dealing double damage.

Dess & Ada, while expensive, grants you access to a Darkness that can clear wide enemy boards. If you manage to survive until turn eight against an aggressive or midrange deck, these Piltover-based Sentinels can turn the game around in your favor since the Darkness they generate is free.

Mistkeepers and Watcher on the Isles provide interesting abilities for control lists that aim to focus more purely on slaying opponents. Mistkeepers provides you with a temporary Mistwraith that you can use to either defend against the opponent or attack them. Watcher on the Isles provides direct burn that can rack up over time. Despite these interesting cards, their expensive costs and below average health totals for their mana will make it difficult for either card to find success.

Catalogue of Regret, which is comparable to Zilean’s second level, is an intriguing card that can benefit Senna-style builds but also Shadow Isles control decks that focus on spells. The most immediate example list that benefits from this is Go Hard since being able to play multiple Go Hards to reach Pack Your Bags faster can win the game at a much more consistent rate.

Senna will join the Shadow Isles champion roster when LoR: Beyond the Bandlewood goes live on Aug. 25.