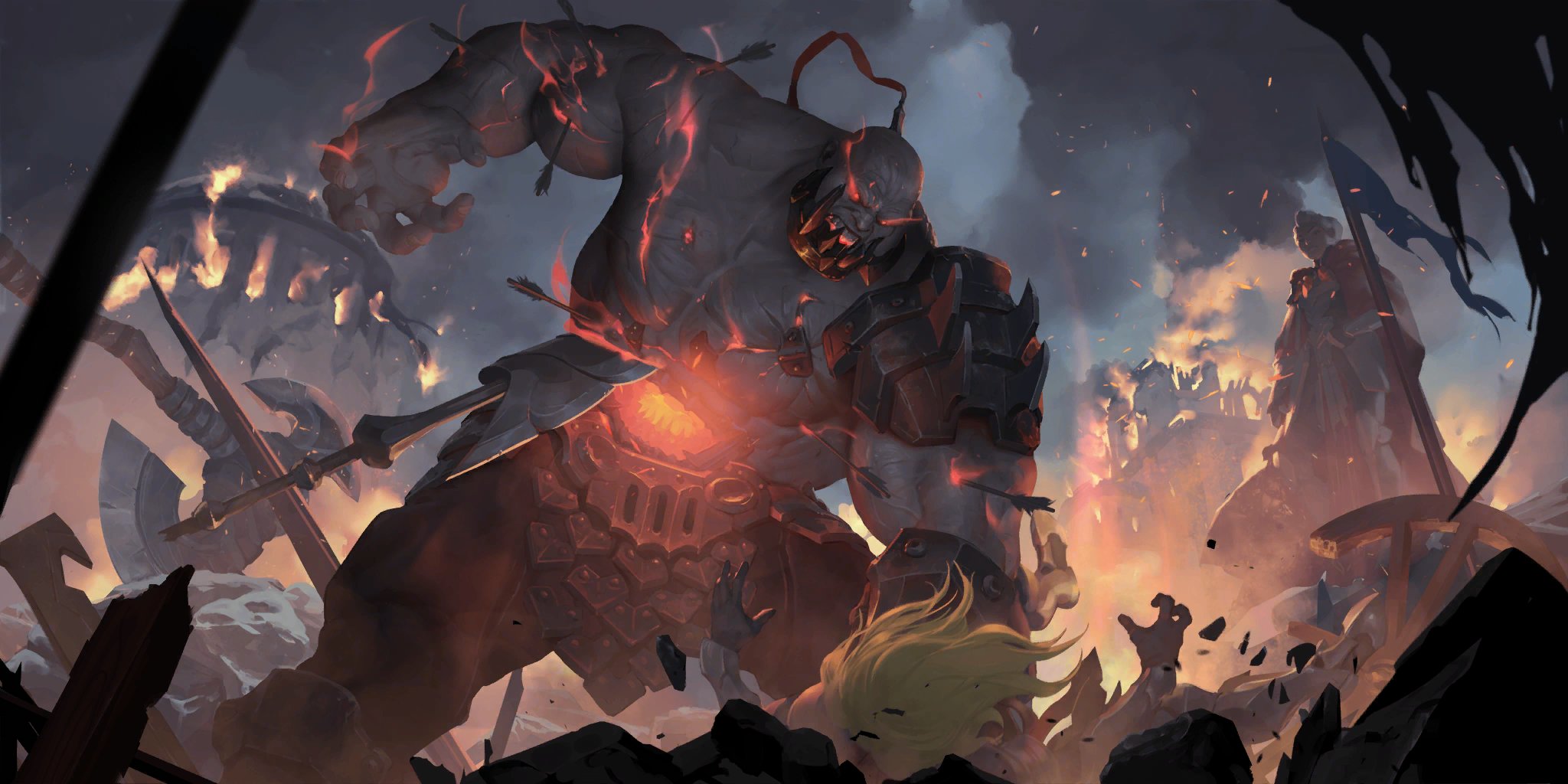 Legends of Runeterra’s upcoming set, Beyond the Bandlewood, has shown off another champion teased in the initial reveal trailer. Today on Twitter and in collaboration with Mobalytics, Riot Games has announced Sion, and this new champion from Noxus gives the region a late-game angle for discard strategies. 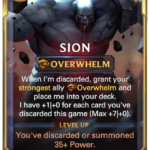 Sion is a seven-mana champion with 3/6 combat stats, the Overwhelm keyword, and an ability that occurs when he’s discarded which grants your strongest ally the Overwhelm keyword and shuffles him back into your deck. In addition, each card you’ve discarded in the game boosts Sion’s power by +1/+0, for a maximum of +7/+0. Sion levels up after you have either summoned or discarded 35 power worth of units. 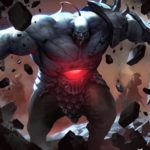 Once Sion obtains level two, his overall statline becomes 10/6, retains his ability which grants Overwhelm to your strongest ally and shuffles Sion back into your deck whenever he is discarded. But Sion now gains a powerful Last Breath, which summons a Sion Returned uncollectible unit: a seven-mana 10/4 unit with Overwhelm, Ephemeral, and a potent ability that performs Rally when he is summoned. 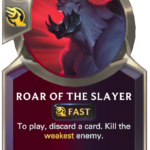 In addition to being Sion’s champion spell, Roar of the Slayer is a Fast three-mana Common Spell that has a discard cost required to play it. After satisfying the cost, the weakest enemy is killed.

Noble Rebel is a Common three-mana 3/2 Overwhelm unit that receives a permanent +2/+1 stat boost if you’ve discarded three or more cards throughout the game.

Grave Physician is a two-mana Common unit boasting 2/2 stats and an effect that activates when played which requires you to discard a card to draw a unit from your deck.

Rare Salt is a Common two-mana Focus speed spell that has you discard a card to summon a Reborn Grenadier and give it +2/+0 for that round.

Lady of Blood is an Epic four-mana Unit with a 2/4 statline and an ability that triggers whenever you discard a non-Fleeting unit, which creates a Fleeting copy in hand.

Fallen Reckoner is a Rare five-mana unit with 4/3 combat stats, Overwhelm, and a summon ability that grants the “Can’t block” negative keyword to the weakest enemy. Fallen Reckoner also creates a Risen Reckoner in your hand as a Last Breath effect.

Risen Reckoner is a three-mana 6/3 unit with Overwhelm and Ephemeral, and the same exact ability as the Fallen Reckoner that grants the “Can’t block” text to the weakest enemy.

In the current LoR meta, discard exists either as a way to accelerate aggressive strategies like Jinx/Draven, or used as a conduit for midrange decks, like Draven/Ezreal with Rummage and Get Excited. Sion—and all of his followers by extension—promotes a higher mana curve and aims to keep on relentless pressure without trying to go all or nothing like aggro does.

Sion himself is a midrange threat that can end a game by himself if opponents aren’t ready to deal with his level two version. When Sion levels up, the threat of a 10 power unit with Overwhelm ready to attack each turn is incredibly imposing, and removing him gives you another chance to attack with your board with another effective Sion swing.

Sion’s best partner will most likely have him stick with Draven since he’s a strong early unit on offensive rounds, and provides the most effective discard fodder in the form of his axes.

Reborn Grenadier is one of the stronger discard synergies introduced in the reveal. The ability to effectively receive a zero-mana 3/2 unit, even if it’s Ephemeral, means you can inflict effective burn against the opponent. Even if Sion himself turns out to be unviable in the competitive meta, there is a healthy chance that Reborn Grenadier can find a spot in Draven/Jinx-styled hyper-aggressive decks.

Some spells, like Poro Cannon, allow you to discard at Burst speed, which means you can summon the grenadier at a speed that leaves your opponent without reaction. While this sounds great offensively, it can also be used as a defensive measure against opposing open attacks.

Grave Physician can help bind this archetype together since you can ditch the least useful card in your hand to hopefully tutor into a more potent unit that fits your mana curve better.

Ancient Warmonger can surprise your opponents with extra burst damage. They can’t know if he’s in your hand, or if you have the opportunity to discard him for two extra damage. This becomes extra effective when combined with cards like Draven, since he can raise his power in a quick pinch at Burst speed.

All of the units which can generate more tokens, like Fallen Rider, Fallen Reckoner, and Lost Soul, allow you to not only constantly fuel up your future discard costs, but also level up progress with Sion.

Out of these cards, Fallen Reckoner provides a very unique effect in the game, with the ability to make an enemy unit unable to block. This debuff assists your strategies and makes opposing chump blockers worthless defensively.

Lost Soul provides an infinite chain of units that cannot be broken under most conventional means. Unless you discard the Twinblade Revenant, or if you discard or your opponent silences the revenant token, then you will always have a playable unit that can feed Sion and your discard costs.

Lady of Blood, while having interesting implications in the narrative side of the lore, also has a potent effect that aids Sion and the other cards introduced here. While her stats are far below the average for her mana cost, she allows you to accelerate Sion’s level up condition and gives you the chance to retain value when discarding cards. Even if you fail to play the Fleeting card discarded, this allows you to double up on effects that trigger when discarded like Fallen Rider and Lost Soul.

With Sion’s reveal as the sixth champion, there are only three more champion reveals to go within the teaser season. Based on the Beyond the Bandlewood cinematic, two of the champions that are nearly guaranteed to join are Xerath and Ziggs. This leaves one more unknown champion. Based on another reveal that happened during the Seasonal Tournament earlier, this can lean towards the announcement of a potential Bilgewater champion.

Sion will join the Noxus champion roster when LoR: Beyond the Bandlewood releases on Aug. 25 with 126 new cards, nine of which include champions.