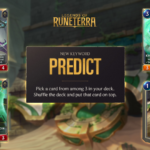 Following Jarvan and Demacia’s reveal in Legends of Runeterra’s upcoming expansion, Empires of the Ascended, the card teaser season has returned to Shurima.

Riot Games, in partnership with Mobalytics, showed off seven new collectible cards alongside a new mechanic Predict. The cards revealed today include the following:

New Shurima cards and their effects

Predict requires the player to select one out of three cards in their deck. The player’s deck is then shuffled with the selected card put on the top of their deck.

Aspiring Chronomancer is a Common two-mana 2/3 unit with a play ability that has the player Predict.

Xenotype Researcher is a Rare three-mana 3/3 unit that has a summon ability that grants three random allies in the user’s deck a permanent +3/+3 bonus to their combat stats.

Khahiri the Student is a Common three-mana 3/3 unit with a summon ability that grants himself +1/+1 for each time the player has used the Predict keyword in that game.

Preservarium is a Rare two-mana Landmark that draws a card when it’s summoned. After counting downwards for two turns, the player will draw an extra card.

Promising Future is an Epic four-mana Slow spell that grants an allied Landmark with a Countdown ability an additional activation.

Ancient Preparations is a potent card as long as you can draw it on the first turn. While sacrificing tempo on the first turn is painful, the fact that Ancient Preparations can improve your draw consistency for future turns is powerful. In addition to this, the two 2/2 Clocklings the Landmark will summon after counting down for two turns will make up for any lost tempo.

Aspiring Chronomancer a unit with fair stats for its cost and another way for you to consistently plan your future turns thanks to its Predict ability.

While Xenotype Researchers’ stats are not the strongest for her cost, she has potential to accrue a ton of value as long as you can draw into your allies that were randomly buffed in your deck. While they may be difficult to find, the Predict keyword will help add consistency into potentially finding them much more quickly.

Khahiri’s student version is dependent on how many times you can predict by the turn you summon him. If you can play Ancient Preparations and Aspiring Chronomancer, you can have a wealth of stats by turn three that would automatically make him a 5/5 for only three mana.

Khahiri the Returned is also dependent on the Predict keyword, since he needs to be seen at least twice in predictions to have premium stats for his mana cost. Whenever you summon him, any future copy will have the +2/+2 buffs that he attained from his Prediction ability.

Preservarium’s ability is card draw at a cheap price. But the main downside to the Landmark is that it’s delayed card draw, which can never come if your opponent wastes Landmark destruction on it or if you are defeated before it can matter.

Promising Future is a card solely tied to Countdown abilities. Even if Countdown proves to be a powerful mechanic, Promising Future comes with a huge tempo loss. This is due to the fact that you are effectively wasting four mana to do nothing on the turn you’re playing the spell. Promising Future’s success depends on if activating abilities like Buried Sun Disc faster is a viable strategy in the next meta.