Riot Games introduced Nasus today as the fifth champion revealed from Legends of Runeterra’s Empires of the Ascended expansion. In addition to his inclusion, there will be a new keyword called Slay.

The newest mechanic is essentially a counter where you get credit for slaying an ally or enemy if one of your cards kills it via damage, strike, or direct kill effect. Despite this, Ephemeral won’t count toward this credit. 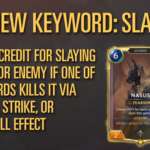 Nasus is a six-mana champion unit with 2/2 combat stats, the Fearsome keyword, and a static ability that grants him +1/+1 for each unit you’ve slain during the game. Nasus reaches level two when he strikes for 10 or more damage.

When Nasus reaches his second level, he gains +1/+1 combat stats and retains his Slaying mechanic and Fearsome keyword. In addition to the retained effects, he also gains a spellshield for added protection. But upon leveling, he gets an aura while he’s on the board that debuffs the enemy with -1/-0 in combat stats. As an Ascended champion, Nasus can level up again by restoring the Buried Sun Disc.

When he ascends to his highest level, Nasus’ combat stats become 10/10 and his aura ability debuffs every enemy by -3/-0 instead.

As a champion, Nasus has similar play patterns to Vi, who needs to scale before becoming an effective threat. Unlike the Piltover champion, Nasus’ improved stats from slaying units are tracked while he’s not in hand. Since Nasus needs to strike for 10 before reaching level two, you’ll need to have eight different units destroyed before Nasus can gain his debilitating aura.

If you’re having trouble leveling Nasus, Ascended’s Rise from the initial reveal can serve as a shortcut to level him up. But you may still want to slay units before playing him. Otherwise, he’ll be a frail 3/3 unit.

Once your Sun Disc activates, level three Nasus will run over any opponent who can’t muster a strong enough board to block him. Thanks to his Fearsome keyword and -3 debuff to all enemies, any foe trying to block him will need at least six power naturally since having five or less power will reduce it to be below the three required to defend.

Nasus will join the champion roster when LoR: Empires of the Ascended is released on March 3.