Legends of Runeterra: Empires of the Ascended’s reveal season has officially begun.

The expansion is two weeks away from officially releasing on March 3. And today’s reveal on Twitter showed off seven new cards for the region, giving hints for what Shurima’s gameplay patterns will be.

The first day of teasers showed off a new keyword, Countdown, which has a card count downward by one each turn. When it reaches zero, the card is destroyed and activates its Countdown effect. Aside from the new keyword, the initial cards also tease an Ascended-tribal and level three champions as a groundbreaking mechanic. 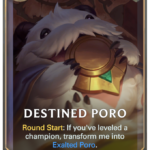 Destined Poro is a one-mana 1/1 Common Poro-tribe unit with a Round Start ability that transforms into Exalted Poro if you leveled up a champion earlier in the game. Its Exalted form gains +1/+1 stats and obtains three random keywords.

Buried Sun Disc is a one-mana Epic Landmark with a Start of Game ability that draws itself if all of your cards in your starting deck are from Shurima. The Landmark has a countdown of 25 that restores the Sun Disc once enough time has passed. Though the 25 rounds of waiting will be long, leveling up Ascended allies will advance the turn count forward by 10.

Once the Sun Disc is restored, it immediately draws one of each of your Ascendant cards. And then, for the rest of the game, your level two Ascendants become level three.

Devoted Council is a three-mana 1/6 Rare unit that restores two health to your Nexus and your champions at the start of each round as long as you leveled up a champion earlier in the game.

Golden Ambassador is a four-mana 3/2 Common unit with an Allegiance ability that draws a champion and grants it +2/+2 bonus stats.

Voice of the Risen is a four-mana 3/4 Epic unit with an aura ability that gives all of your allies +2/+0 while she’s on the field as long as you leveled up a champion earlier in the game.

Ascended’s Rise is a seven-mana Epic Slow spell that levels up all of your level one Ascended allies.

While no Shuriman or Ascended champions have been revealed yet, Shurima’s identity involves leveling up your champions so your cards can reach their full potential. It also seems like Ascended champions, which are likely to be tied to Azir, Renekton, and Nasus, have the ability to go further beyond the natural bounds of level two and reach level three thanks to the Sun Disc.

Speaking of the Sun Disc, the fact that it can be consistently drawn by the first turn if your deck is mono-Shuriman will improve its consistency in helping you reach its Countdown ability as quickly as possible. The viability of these cards depends on the strength of each Ascended champion and how easy it is to level up each of them. Right now, Ascended’s Rise is a seven-mana slow that manually levels up each Ascended ally to level two. This effect can be achieved as soon as turn four if you stored at least three spell mana by the end of round three.

You can try out these cards and more when LoR: Empires of the Ascended is released on March 3.