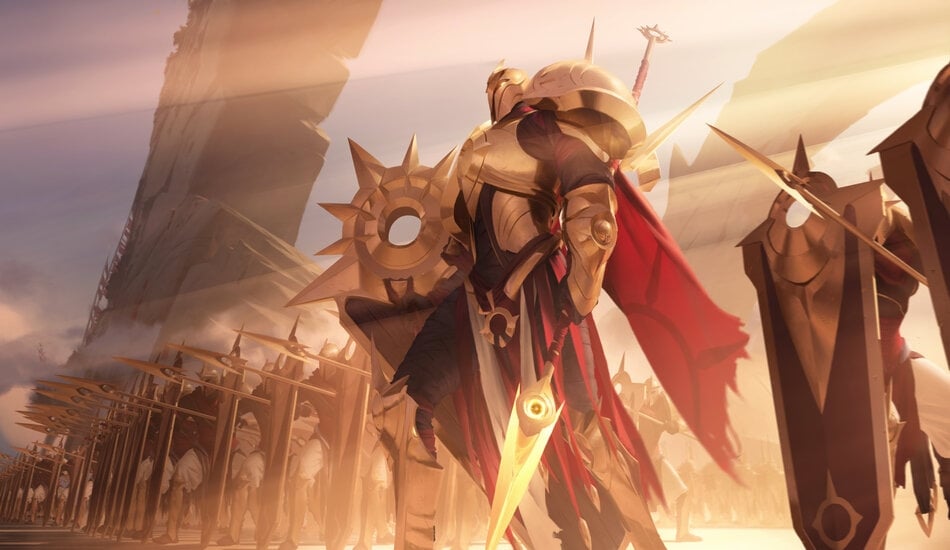 Riot Games revealed Leona today as the next Call of the Mountain champion in Legends of Runeterra. But her spell package lacks value.

The Daybreak archetype may have potential with the release of CoM on Aug. 26, mostly due to its units and not its spells. Three new Daybreak spells were revealed today by Riot: Leona’s Morning Light, Sunburst, and Zenith Blade. And a fourth spell teasing the next LoR champion spoiler, Guiding Touch, was also introduced.

Leona’s spell card, Leona’s Morning Light, was the best Daybreak spell revealed today. It has a steep five-drop cost and is Slow. But it has potential due to activating all Daybreak effects at once when its Daybreak ability is activated. Leona’s Morning Light also gives all allies +2/+2 in the round it’s played.

Sunburst is essentially a six-cost Thermogenic Beam that can Silence (card text, keywords, and effects are removed) a unit if it doesn’t kill it. The Daybreak spell does Silence a champion, however, as confirmed by content design lead, Shawn Main. The ability to Silence a champion only lasts for the round in which it was cast and isn’t a permanent effect.

The final LoR Daybreak spell revealed today was Zenith Blade. It grants an ally +1/+2 and Overwhelm. It also has a Daybreak ability that when activated draws a Zenith Blade. Rahvun, Daylight’s Spear is likely the best unit to target with Zenith Blade, improving the unit’s overall value. The issue, however, is that Zenith Blade is a Slow spell, potentially robbing its Overwhelm value by allowing an opponent to play a unit that can prevent the damage.

Guiding Touch was the best LoR spoiler revealed today, providing healing and card draw. It’s a low-cost two-drop at Burst speed that can Heal an ally or Nexus for two, while also drawing a card. Guiding Touch is a simple spell that’s packed with value and will be an auto-include in just about any archetype running Targon.

Daybreak and its full LoR package are scheduled to release on Aug. 26.

Update Aug. 20 12:15pm CT: Content design lead Shawn Main confirmed on Twitter that Sunburst can Silence a champion unit. It was previously unclear if applying Silence to a champion was possible.