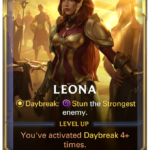 Riot Games introduced Legends of Runeterra fans to the fifth champion from the Targon region today that continues building on the Daybreak mechanic in the Call of the Mountain set.

Leona is the champion that Riot unveiled in today’s teasers. She’s a four-mana champion unit with three power and five health and a Daybreak ability where she Stuns the strongest enemy. She reaches her leveled form when you activate Daybreak four times.

Leona’s leveled form is also four mana with +1/+1 in stats and the same effect. The main difference is that when she levels up, any other future Daybreak activations will also Stun the strongest enemy.

As with the other Daybreak cards revealed yesterday, Leona wants to storm the board quickly and efficiently as the first card played. Due to the way Leona’s level up condition is set up, it’s easily possible to have her level up the moment you play her on turn four. This can be achieved if you can play a single Daybreak card every turn leading up to her.

Ignoring her effect, she has efficient stats for her cost (especially when leveled). Once you bring her effect into the mix, she can easily control the board and grant your other aggressive Daybreak-based cards a straight path to the enemy Nexus.

This level of control grows exponentially when you bring Rahvun, Daylight’s Spear into the mix. Since he grants you another Daybreak card and allows you to activate multiple Daybreaks in a turn, it’ll be possible to prevent your opponent from making any meaningful progress toward defeating you.

Leona will join the champion roster when LoR: Call of the Mountain is officially released for PC and mobile on Aug. 26.