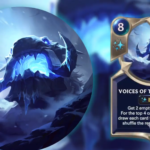 A total of three cards from the upcoming Monuments of Power expansion were spoiled today, showcasing card draw ability, Elusive stuns, and Overwhelm grants in Legends of Runeterra.

Set to release on Oct. 14, the MoP expansion continues to shock players with its potential to disrupt the meta. With the reveal of Howling Abyss today, two followers and a spell from Targon and Freljord were also featured: Voices of the Old Ones, Sneaky Zeebles, and Crystal Ibex.

Another follower revealed today was Sneaky Zeebles, a five-drop Targon with Elusive who stuns enemies with two or less power upon play. Sneaky Zeebles’ casting cost is high but has potential in Aggro builds using the Targon region. Able to shut down other Aggro builds via Sneaky Zeebles’ “Play” ability, the Elusive Targon should hit an opponent’s Nexus when attacking the round it was played. But after that, Sneaky Zeebles is just an expensive 3/3 Elusive.

The Freljord region, in addition to the Howling Abyss reveal, was also shown some love via Voices of the Old Ones. The eight-drop spell provides two empty mana gems and pulls cards into a hand that cost eight or higher that are in the top four cards of a player’s library. It’s a solid fetch spell that can provide a late-game advantage. Voices of the Old Ones is niche but playable within Control builds using high-cost cards.

All three followers revealed today will become available to play on Oct. 14 with the launch of the MoP expansion within LoR.