Legends of Runeterra: Monuments of Power’s card reveal season is nearing its end. 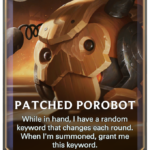 Patched Porobot is a rare two-mana Poro unit that is 2/3 in stats and boasts an effect which grants it a random keyword that swaps each turn it is in your hand. Once you summon the Patched Porobot, it is granted the last Keyword that was applied to it. Trevor Snooze Bottom is an epic three-mana unit with 0/3 in stats and a Support ability that summons an attacking Ephemeral and Elusive Mumblesprite with stats equal to his supported ally. Nopeify is a two-mana common Fast spell that stops a Fast or Slow spell that costs three mana or less.

Patched Porobot is an interesting card for Freljord Poro-based decks that use Piltover and Zaun as the partner region. Patched Porobot has fine vanilla stats on its own for its cost, but the ability to find keywords outside of Freljord and Piltover and Zaun gives it potential similar to Lonely Poro. If you find a potent keyword it will make your future Heart of the Fluft a daunting menace.

Trevor Snoozebottom is another card that pieces together with the aggressive Support archetype that Ionia aimed for recently in the Call of the Mountain release. Being able to double up on your damage potentially allows you to close out games in a surprising fashion. If you pair Trevor Snoozebottom with Mountain Sojourners you can perform an impressive chain of stats which can overpower your opponent with massive damage. In addition to this, if your opponent tries to block the weak Trevor Snoozebottom, this gives you a chance to react with a potential Death Mark, which will allow you to transfer the Ephemeral from the Mumblesprite to an opposing unit which grants you free removal.

Nopeify is an alternate take on the Ionian card that is popular and reviled amongst foes, Deny. For half of the mana cost, Nopeify allows you to aggressively stop opposing spells that are three mana or cheaper. This slots into hyper-aggressive decks that are aiming to end the game quickly, since the ability to stop cheap removal can often be backbreaking for any opposing control deck.

Claim these three cards and more, when LoR: Monuments of Power releases Oct. 14 with 40 new cards.