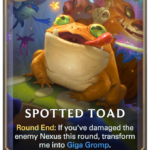 Riot Games teased three Legends of Runeterra followers and one transforming enabler for the upcoming reveal of Gnar in the new A Curious Journey expansion.

Cards that transform aren’t new to LoR, specifically within the Piltover & Zaun region. The A Curious Journey spoilers revealed today were all Bandle City cards, a dominant region that pairs well with P&Z. The dual region contains a possible sleeper one-drop spell that supports a new transformation archetype via Concurrent Timelines.

Chief Nakotak was the showcase card of today’s LoR spoilers, enabling transformation by granting +1/+1 to an ally when it transforms while also fully healing it. The three transforming followers from the A Curious Journey spoilers were Teenydactyl, Spotted Toad, and Bitsy Lizard. Transforming units keep their casting cost while typically gaining an increase in base stats and a keyword or ability. 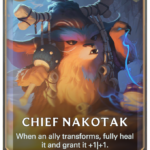 Spotted Toad is a five-drop 4/5 that transforms into Giga Gromp at the end of the round if you damaged the enemy Nexus that round. Upon transforming into Giga Gromp, the Summoner’s Rift monster deals one damage to all enemies, has its stats increased to 6/7, and gains the LoR keyword Impact.

Similar to Spotted Toad is Teenydactyl, a four-cost 4/3 that transforms into TerrorDactyl at the end of the round if you damaged the enemy Nexus that turn. The TerrorDactyl nails its flavor through 6/5 base stats, Impact, and dealing one damage to the enemy Nexus at round start.

Chief Nakotak supports these hot transformers. The three-drop Yordle has 3/3 base stats but is not a multi-region LoR card. Chief Nakotak fully heals an ally upon transformation, making Giga Gromp and TerrorDactyl valid threats, and grants the transformed ally +1/+1.

Players can test out the new LoR transforming units with the release of A Curious Journey on Feb. 16.