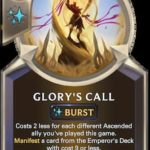 The final day of Legends of Runeterra support archetype spoilers prior to the reveal of Evelynn showcased several strong cards within the Shurima, Piltover & Zaun, and Bilgewater regions.

Scheduled to release on July 20, the Forces from Beyond expansion will feature Gwen, Kai’Sa, and Evelynn as the new champions. Both Kai’Sa and Gwen have been revealed, with Evelynn getting spoiled tomorrow. In addition to the new champions and their support packages, other existing archetypes are getting support as well. Today’s LoR spoilers showcased cards that improve specific decks within several regions.

Mono-Shurima Legends of Runeterra decks now have easier access to the Emperor’s Deck via the Forces from Beyond spoiler, Glory’s Call. The Emperor’s Deck is a list of nine cards that are created when Azir hits level three. Synergizing with Ascended champions, Glory’s Call costs two less to cast from six mana for each Ascended ally during this game. It then will Manifest a card from the Emperor’s deck that costs nine or less, excluding only Ascended’s Call from the possibilities.

In addition to the Shurima region getting a buff today, so did Piltover & Zaun via Salvaged Scrap. The two-mana Burst speed spell offers players the option to discard up to two cards and then create that many followers from your regions that cost one more and reduced their costs by one to cast. Jinx is an obvious champion that can use Salvaged Scrap, as well as any deck that incorporates a P&Z discard strategy—like Rumble and various builds that include the Boom Baboon/Flame Chompers! package.

Also packed away in the Piltover & Zaun Forces from Beyond spoilers was Evil Imperfectionist. It’s a four-drop 4/4 (not related to Jhin) that creates four exact copies of a card in hand upon getting Played and reduces their cost by one. Evil Imperfectionist is a cute card that will see gameplay within specific archetypes, but her cost to cast is likely too high, making the P&Z follower a little less versatile.

The Bilgewater region got two new spells: Ransom Riches and Swindle. Both are Burst speed spells that have potential. Swindle is a two-cost spell that can get reduced to one via Plunder. Instead of stealing an opponent’s card, it copies an opponent’s card and gives you the option to claim that copy via Manifest. Also using the LoR Manifest keyword, Ransom Riches is a one-cost spell that will Manifest a follower you can afford.

Both Bilgewater spells provide alternative options for archetypes that want to take advantage of what an opponent is playing. Whether these spells are solid enough to push those archetypes to the next level is unknown at this time.

The final LoR archetype support card revealed today was Sneezy Biggledust!, a four-cost Focus spell in Bandle City. It pumps the team for +1/+1 during that round only and can pump for +2/+2 instead if the units getting pumped were created and not Cast/Played. The P&Z Husk token for Evelynn was also spoiled, granting the positive keyword Quick attack.

Players can test out all the new Legends of Runeterra cards with the release of Forces from Beyond on July 20.