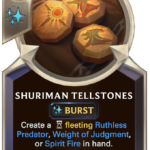 Three Sisters has been a popular Legends of Ruenterra spell within the Freljord region since its release in Empires of the Ascended. With the release of the Worldwalker expansion on May 25, all 10 regions within LoR will have a version of Three Sisters via Tellstones. Players who enjoy other Riot games will recognize Tellstones from the tabletop game Tellstones: Kings Gambit. Each Tellstone is at Burst speed and creates three Fleeting spells a player can choose from.

Of the 10 regions, four of the Tellstones stand out for now: Ionian, Noxus, Piltovan, and Demacian. Most of the Fleeting spells that are offered are reactive LoR spells and they’re often cut from players’ decks for better cards or spells. But the Tellstones will likely change this existing trend, offering players additional options against a variety of archetypes.

Players can test every LoR Tellstone spell with the release of the Worldwalker expansion on May 25.