The hot Ionia Aggro deck that came out of the Domination expansion following the LoR early access event and after a full day of gameplay was Vayne/Zed. But close on its heels is the Blade Dance archetype with Irelia and Gwen. Using an Elusive foundation created by TempoMauo, Dot Esports put together an evolved version of the Blade Dance archetype during early access with new cards like The Spirit of Wuju for mid-game tempo and Dragoncaller as another alternative win-con in conjunction with Atrocity.

Tapping into the wide variety of spells that the Ionia region offers, the Gwen and Irelia Blade Sisters LoR deck has an aggressive start that won’t lose gas when heading into the late-game stages. New cards like Opulent Foyer and Wraith of Echoes were tested but felt clunky.

We then tested The Spirit of Wuju and found it slotted nicely in as mid-to-late-game 4/3 that uses Flow to reduce its cost to three while also drawing a spell upon getting summoned. And for games when the Aggro Blades fail to hit lethal early, Dragoncaller was added as a one-of alternate win condition.

The six-drop Ionia Domination expansion unit has Attune, synergizing with Irelia and Flow during the late game while also summoning an Ephemeral The Empyreal at Round Start with Flow getting triggered. 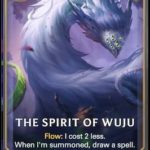 The early-game strategy for Gwen and Irelia Blade Sisters focuses on Greenblade Duo and Sparring Student as the aggressive attackers. Hallowed cards are great on defense, and there are fun shenanigans to be had with Lead and Follow, pumping up the stats on Greenblade Duo and Sparring Student while still getting attack ticks toward an Irelia level-up.

Two copies of Glimpse Beyond help ensure the LoR build doesn’t run out of gas, alongside The Spirit of Wuju. Stalling players for a turn with Concussive Palm, especially those running Vayne/Zed, can give you the advantage needed to win the next round while Deny and Nopeify! stall out key spells in Seraphine decks. And a one-of Atrocity is another alternate win-con, alongside Irelia’s Vanguard’s Edge spell and Dragoncaller.

Related: Arclight champion skins shine against the Darkin in Legends of Runeterra

Blade Sisters isn’t an S-tier deck but it’s a solid B+ to A-tier deck to run when seeking to climb the LoR ladder quickly. The Gwen and Irelia deck can counter Vayne and Zed and holds up to other new builds using Seraphine or Varus. The LoR deck is also easy to understand for new, casual, and lower Elo players while still offering intriguing lines and complexity for higher-level players as well.