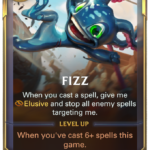 Legends of Runeterra’s card reveal season continues with the newest region, Bilgewater, and a familiar trickster that torments his adversaries by evading their strategies, Fizz.

Fizz is the champion that Riot unveiled in today’s teasers. He’s a one-cost champion unit using two power and one health that can gain Elusive if you cast a spell. He also has a unique effect that lets him stop all enemies from targeting him with spells. Fizz reaches his leveled-up form when the player casts six spells.

Fizz’s leveled-up form is also one-cost with +1/+1 in stats and the same effect. For his new power, he obtains his Nexus Strike ability that allows him to Chum the Waters, which is a four-mana spell that gives enemy units Vulnerable for the turn and summons a four-cost unit with five power, one toughness, and Overwhelm.

Fizz draws a lot of similarities from the recently revealed Lee Sin in that you want to cast spells as often as possible to achieve highest potential. The fact that Fizz can avoid being targeted, similar to his League of Legends counterpart, allows him to be annoying and avoid interaction to deal most of his damage. This can give you easy access to plundering your opponent each turn.

Fizz will join the champion roster when LoR is officially released for PC and mobile on April 30.