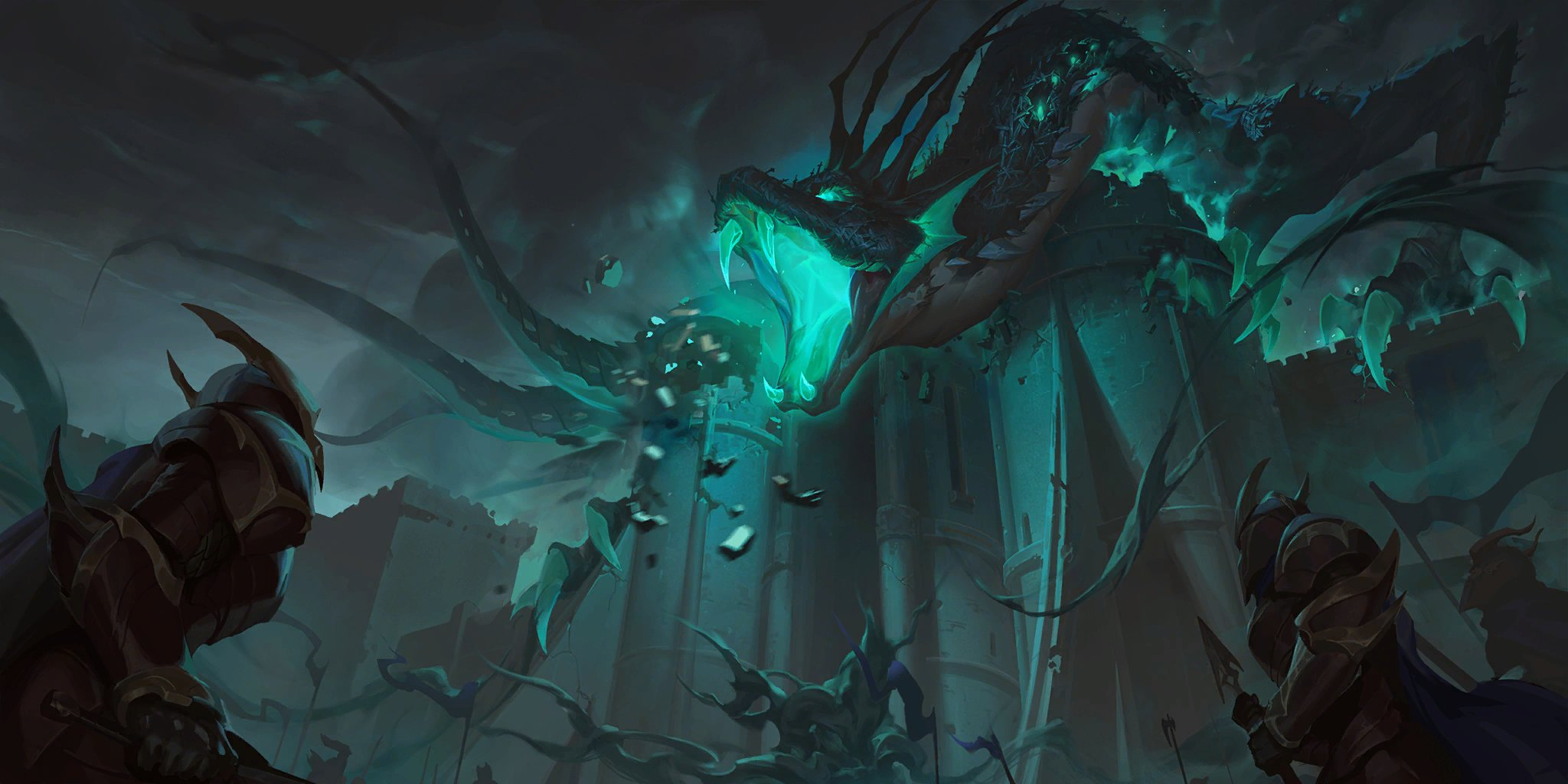 Continuing the surprise reveal season yesterday, Riot Games has shown off another set of Legends of Runeterra card teasers that are coming with the upcoming Ruination-themed event. Today on Twitter, the developer revealed four new cards which are the first Dragons with Fury outside of Demacia and Targon.

Today’s revealed cards are as follows: 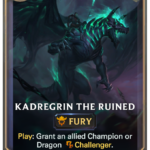 Kadregrin the Ruined is a Rare six-mana Dragon unit from Demacia with 6/6 combat stats, the Fury keyword, and a play ability that grants an allied champion or Dragon the Challenger keyword permanently.

Ruined Dragonguard is a Common three-mana Unit from Demacia with 2/4 combat stats and a static aura ability that has your allied units with Fury gain an extra +1/+1 whenever they successfully activate their Fury keyword.

Crawling Viperwyrm is a Common two-mana Dragon unit from Shadow Isles with 3/2 combat stats, the Fury keyword, and a Play ability that forces you to have it strike an allied unit or deal three damage to your Nexus.

Camavoran Dragon is a Rare four-mana Dragon Unit from Shadow Isles with 4/3 combat stats, the Fury and Fearsome keywords, and an ability similar to the Viperwyrm that requires you to have it strike an allied unit or deal three damage to your Nexus as you play it.

In addition to its play effect, the Camavoran Dragon has an ongoing ability that drains the enemy Nexus for one damage whenever it slays any unit.

Aside from these cards marking the first time that the Fury keyword is printed on cards outside of Targon and Demacia, they wield interesting synergies that revolve around killing your own units.

Crawling Viperwyrm and Camavoran Dragon accentuate this strength as they combine the upside of Dragons and facilitate more ways to destroy your own allies.

Aside from activating your Last Breath effects faster, you also gain extra combat start boosts thanks to Fury. If Crawling Viperwyrm uses its strike effect, a three-health unit that continues to scale upwards arriving as soon as turn two can be a difficult threat for some decks to deal with.

Camavoran Dragon is similar to Viperwyrm in how it can begin as a 5/4 as opposed to a 4/3 if you’re willing to sacrifice a unit to do so. Aside from the threat of getting stronger over time, Camavoran Dragon has an alternate win condition on the side that allows you to gain extra sustain and burn the opponent once time.

If you want to continue to threaten your opponent with Dragons, Ruined Dragonguard is a Demacian unit that doubles the effectiveness of your Fury keyword, which can quickly grow out of hand for your opponent to deal with if not answered.

Thanks to the Dragonguard’s four health on three mana, its natural bulk will make it difficult for most opponents to deal with.

The corrupted version of Kadregrin continues to provide utility like his original form. But instead of boosting stats for all of your future Dragons, Kadregrin the Ruined gives one of your Champions or Dragons the Challenger keyword.

This potentially hints at more Champion-style synergy cards coming, like the Thrumming Swarm that was revealed yesterday. This upcoming champion mini-expansion, which heavily implies Viego’s arrival, will provide more interesting abilities and bonuses for decks focusing on champions.

Aside from bolstering the effectiveness of your Champions, the Challenger keyword is one that Dragons appreciate. This is due to the fact that you can select favorable trades and set up more Fury procs.

Thanks to Kadregrin the Ruined costing three less mana than his original form, this gives him a more feasible chance at seeing play in the main deck, however little that chance may be.

At the end of the card reveal video, there were extra illustrations which seemed to depict Shyvana’s Ruined skin from League of Legends, teasing more champion skins coming with the next patch. This also leaves Shyvana as the first champion in LoR with two skins.

Try out these cards and more when LoR’s next event is released July 14.