Riot Games included a total of five Legends of Runeterra champions in the Awakening expansion, each containing their own unique keywords and mechanics within their package.

Releasing on Aug. 31, the Awakening expansion added two new champions to the Runeterra region, introducing two new Origins. Introducing Darkin to the digital card game, Kayn’s Origin is The Shadow Reaper. Players can put any card in a deck with Kayn as the champion that has the card type Cultist. Upon summoning three different Cultist units, Kayn is automatically drawn. And the other Runeterra champion was Jax, showcasing the Origin Grandmaster at Arms. All LoR cards with the type Weaponmaster can get put in a deck with Jax as one of the champions.

In addition to the two new Runeterra region champions, Riot added a new card type called Equipment. Players can cast Equipment with spell mana only once per turn, attaching it to a unit on the battlefield. If the unit dies, the Equipment returns to that player’s hand. And priority is passed to the opponent upon playing Equipment.

Kayn uses the new mechanic Auto-Equip, automatically equipping the champion with The Drakin Scythe upon getting played or summoned, and will even create it if needed. Ornn also has a variation of Auto-Equip, getting equipped with an exact copy of an ally’s Equipment upon play or summoned. If an ally doesn’t have Equipment, Ornn will Auto-Equip from the strongest in hand. 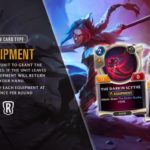 Similar to Kayn and Ornn, Jax also uses Equipment. Within the Jax champion support package is the new mechanic called Improvise. Upon the Improvise ability getting triggered, its controller will pick one of two random Equipment options from a depleting pool of eight and Equip it to the ally that activated Improvise unless otherwise stated on the card. If the ally wasn’t played from hand, Improvise Equips a random Equipment instead

With the addition of Master Yi to LoR came a new mechanic called Flow. It’s a triggered ability that activates upon its controller playing two or more spells and/or skills in the previous round. And Ornn introduced the mechanic Forge. It grants an ally +1/+1 and if the ally is Equipped, Forge grants the Equipment +1/+1 instead.