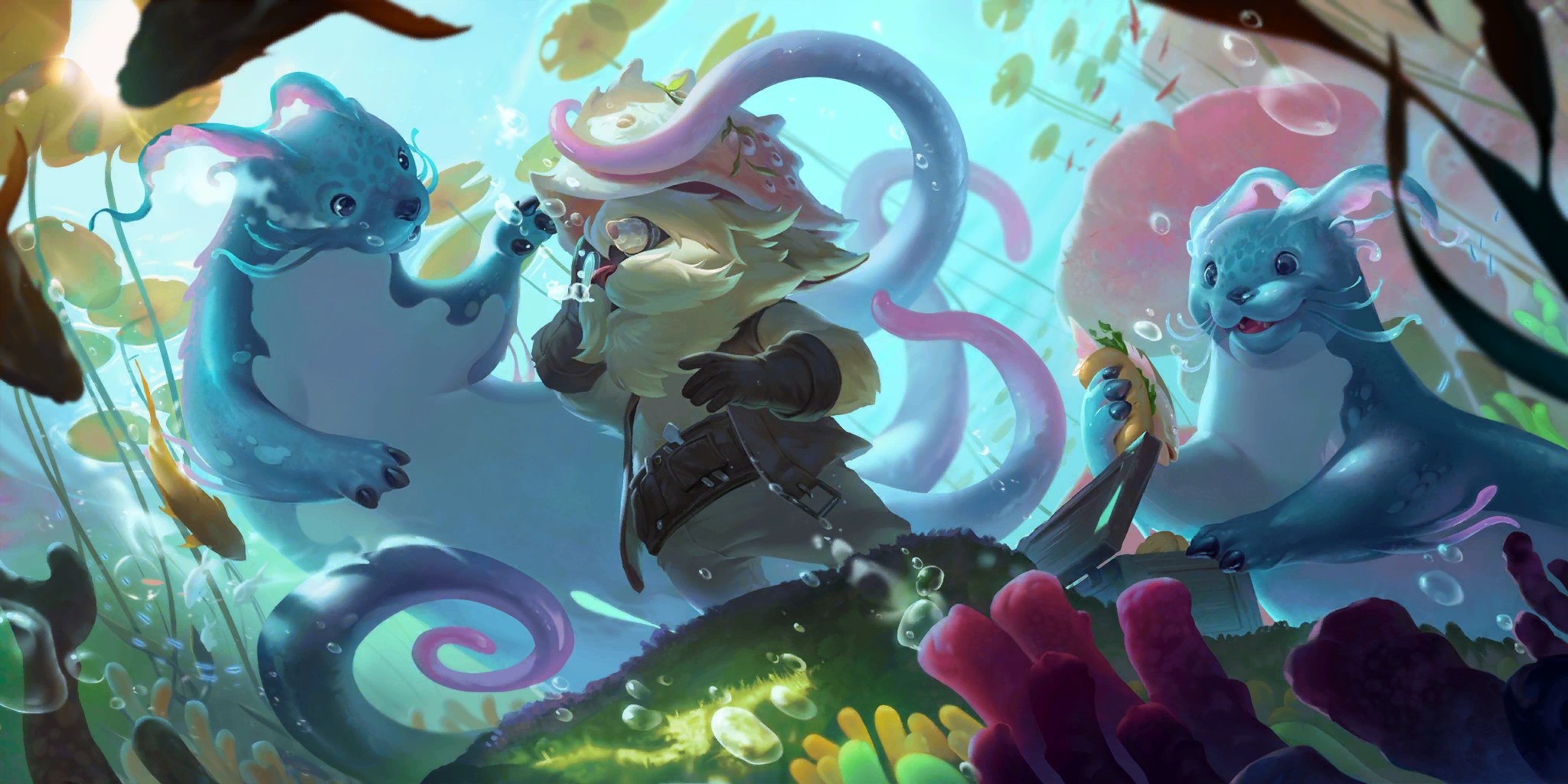 Legends of Runeterra’s upcoming set, Beyond the Bandlewood, has revealed eight more collectible cards today and has teased a new mechanic: Pranks. The upcoming effect comes from an uncollectible one-mana focus spell with the same name, where you pick between one of two non-champion cards in the enemy’s hand or deck to “Prank” it. 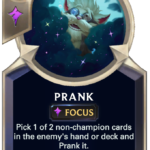 After casting the spell, the Prank is a random negative effect that attaches itself to a card. While Riot Games has only shown off two effects on Twitter, it’s reasonable to assume there will be more of them, especially for Spells and Landmarks. 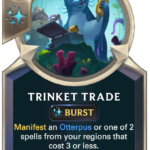 Otterpus is a Common one-mana 1/1 Unit from Bandle City with the Attune keyword and a summon ability which creates a Prank in hand.

Trinket Trade is a Rare one-mana Burst Spell from Bandle City that Manifests an Otterpus or one of two spells from your regions that cost three mana or less.

Kelp Maidens is a Rare two-mana Unit from Bandle City with 2/1 combat stats and the Elusive keyword and a Nexus Strike ability which creates a Prank in hand.

Conchologist is a Rare two-mana Yordle Unit from Bandle City with 2/2 combat stats and an ability that activates when played and Manifests a spell from your regions that cost three or less.

Benemone is a Common four-mana Unit from Bandle City with a 4/3 stat line and a summon ability that creates two Pranks in your hand.

Shark Trainer is a Rare seven-mana Yordle Unit from Bandle City and Bilgewater with the Attune keyword and a 6/6 stat line. Whenever allies attack, one spell mana is spent to summon an attacking Short Tooth.

Shell Game is a Rare five-mana Burst speed Spell from Bandle City that refills your spell mana and gives an ally the Elusive keyword and a +1/+1 stat bonus for the round.

Tricksy Tentacles is a Common two-mana Fast spell that discards the lowest cost card in your opponent’s hand.

It’s impossible to accurately judge the power of cards that generate Pranks until Riot reveals all of the possible debuffs in this new mechanic. In spite of that, a few of the initial cards show some promise due to their statlines and keywords.

Otterpus and Kelp Maidens have fair stats for their cost when you consider their keywords and abilities. Otterpus having Attune allows them to either effectively be free thanks to Attune or spend the bonus spell mana to Prank your opponent instantly. Kelp Maiden’s 2/1 statline with Elusive grants her room in aggressive lists that seek to avoid interacting with enemy units. You can Prank your opponent when you have excess mana.

Unless Prank turns out to be a competitively viable mechanic, Benemone may fall behind the rest of the revealed cards due to its below-average statline. In addition, the fact that you will need to spend one mana twice to activate the Pranks eventually provided makes future mana curves clunky and the new Benemone incredibly awkward.

Shell Game can be an effective tool in Elusive-style decks looking to turn a big unit into a threat that the opponent will struggle to block. While the initial five-mana investment is a lot for a temporary buff, the three spell mana returned to you allows more opportunities to play more combat buff spells in quick succession.

Tricksy Tentacles is another disruption tool found in Bilgewater that draws similarities to Hunt the Weak from Noxus. While you’re still going one on one with the opponent, this new spell allows you to play it at faster speeds and lets you hit a wider range of cards, including champions.

Trinket Trade uses the new Manifest keyword shown off yesterday and allows for more consistent Prank access. While consistently having a single option from Trinket Trade is welcome, there is a chance that you can find a helpful spell in your other two options.

Conchologist is similar to Trinket Trade. However, the initial 2/2 stats provided allow you to contest the board while effectively “drawing” a card that can be of use for you later. The main downside of Conchologist is that there’s always a chance you’ll receive three bad spell choices.

Shark Trainer serves as a curve topper for aggressive and midrange decks due to the extra 4/2 Overwhelm unit it can provide during your attacks. Thanks to the Attune, you’re effectively guaranteed a chance to summon a Shark, even if you summon the trainer without any spell mana.

The major weakness to Shark Trainer is that his effectiveness drops significantly when summoned on turns where you do not have an attack token. Despite this, removing six health can be a challenge for some decks, and multiple Shark Trainers on the board can yield to powerful wide-board attacks in a similar fashion to Emperor’s Dais and Azir.

LoR: Beyond the Bandlewood releases Aug. 25 with 126 new cards, nine of which include champions.