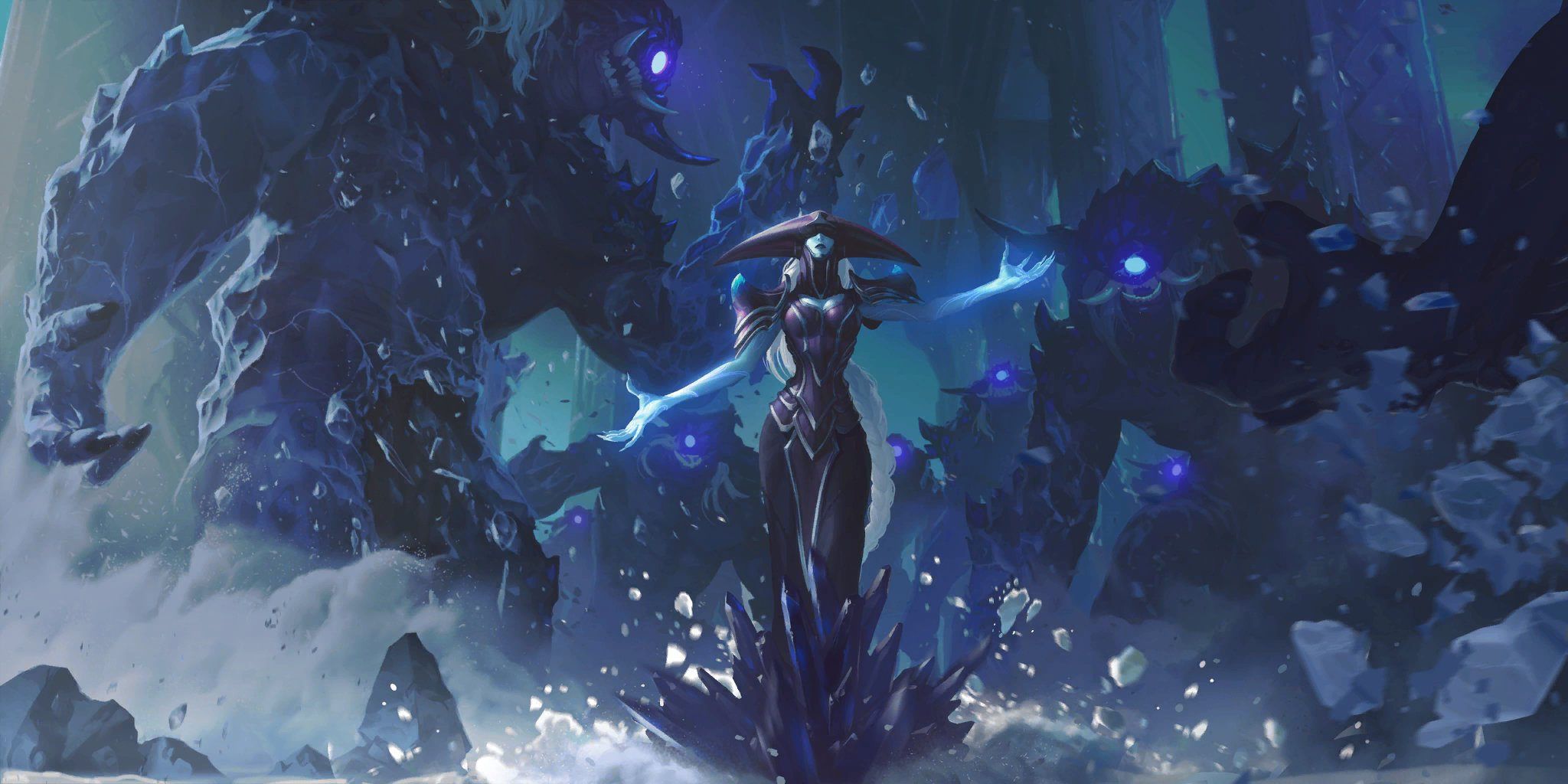 The final sister between the trio of Ashe and Sejuani is finally set to arrive in Legends of Runeterra: Empires of the Ascended. 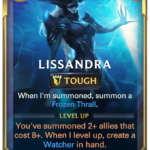 Lissandra is a three-mana champion unit with 2/3 combat stats, the Tough keyword, and an ability that summons a Frozen Thrall when Lissandra is summoned. Lissandra levels up when you’ve summoned two or more allies that cost eight or more. When she levels up, she creates an uncollectible Watcher in hand.

When Lissandra reaches level two, she gains +1/+1 combat stats, retains her Summon ability and her Tough keyword, and gets a new Round Start ability that creates a Fleeting Ice Shard in hand that costs zero mana. In addition, while she’s on the board, your Nexus becomes Tough—a unique ability that’s entirely new to her.

The Watcher that Lissandra adds to your hand when she levels up is a hulking 17-mana unit with 11/17 in stats and a massive ability that Obliterates the enemy’s entire deck whenever it declares an attack. For the Watcher to be played outside of mana cost reduction abilities from cards like Targon’s Peak or Revitalizing Roar, you need to have summoned four allies that cost eight or more mana this game. After performing this gargantuan task, the Watcher will reduce its own cost to zero.

Since Lissandra doesn’t need to be on the board and witness the summoning of two expensive allies to level up, you can always play her after that event to guarantee a free Watcher in hand.

Entomb is a Rare five-mana Fast spell that Obliterates a unit and summons a Frozen Tomb in its place. Frozen Tomb is a Landmark with a Countdown two ability that summons an exact copy of the obliterated unit after enough time has passed.

Ice Shard, besides being a card that level two Lissandra can create for free, is a Common three-mana Fast spell that deals one damage to everything. This means units and the Nexus on both sides of the board will suffer damage.

Blighted Ravine is a Rare four-mana Landmark that heals your Nexus for four when summoned. In addition, it has a Countdown of one where it’ll deal two damage to everything. Similar to Ice Shard, this includes both Nexus and units.

This Freljord cycle synergizes well with the recently revealed Taliyah, alongside the newest set of Shurima Landmark-focused cards.

Lissandra, Draklorn Inquisitor, and Frozen Thrall all are cards that can conjure Frostguard Thralls after enough time passes. If you sacrifice enough early tempo and get the perfect curve, you can play Frozen Thrall in round one, Promising Future on turn three, and then Taliyah in round five for two, waking Frost Guard Thralls the turn immediately after.

Lissandra herself is a menace since she can help add more Thralls to your board while stalling out the game with her defensive keyword and stat line. While Lissandra’s combat stats are below average for her cost, her level up ability will put the opponent on a timer. She can protect your Nexus from the constant Ice Shards she can let you cast each turn and the looming Watcher she creates will sit in your hand, waiting to Obliterate the opponent’s deck and ending the game on the spot.

Besides summoning another Thrall Landmark, Draklorn Inquisitor can help you catch up on any lost tempo that you spent on summoning Frozen Thralls since he essentially halves the time you need to wait for the Frostguard Thrall to awaken.

In addition to being Lissandra’s champion spell, Entomb is comparable to the recently revealed Ancient Hourglass. The main difference between the two is that Entomb has offensive utility and can temporarily remove enemy threats for a couple of turns. In addition, you can potentially remove the Frozen Tomb with cards like Desert Naturalist and It That Stares.

Blighted Ravine is similar to the old Avalanche that used to deal two damage to everything in addition to units. The four healing it provides will help stall out the game and the Avalanche-like effect will come down the following turn, meaning you can punish opposing boards that are trying to develop against you.

Three Sisters references the bond between Ashe, Sejuani, and Lissandra by giving you the ability to add one of their champion spells to your hand. While the card provided is Fleeting, the versatility of this card can either reduce enemy power (through Ashe’s Flash Freeze), temporarily boost your ally (with Sejuani’s Fury of the North), or temporarily disable an enemy threat with the potential to save an ally (with Lissandra’s Entomb).

While it’s unknown if you can cast Cold Resistance without a unit on board, this new burst card is an alternate option to Freljord’s popular Catalyst of Aeons for mana ramp. Instead of healing your Nexus, you can add more bulk to one of your units. This pairs well with weak key units like Wyrding Stones or allies with the Regeneration keyword.

You can wield the power of true ice when Lissandra is added to LoR: Empires of the Ascended on March 3.