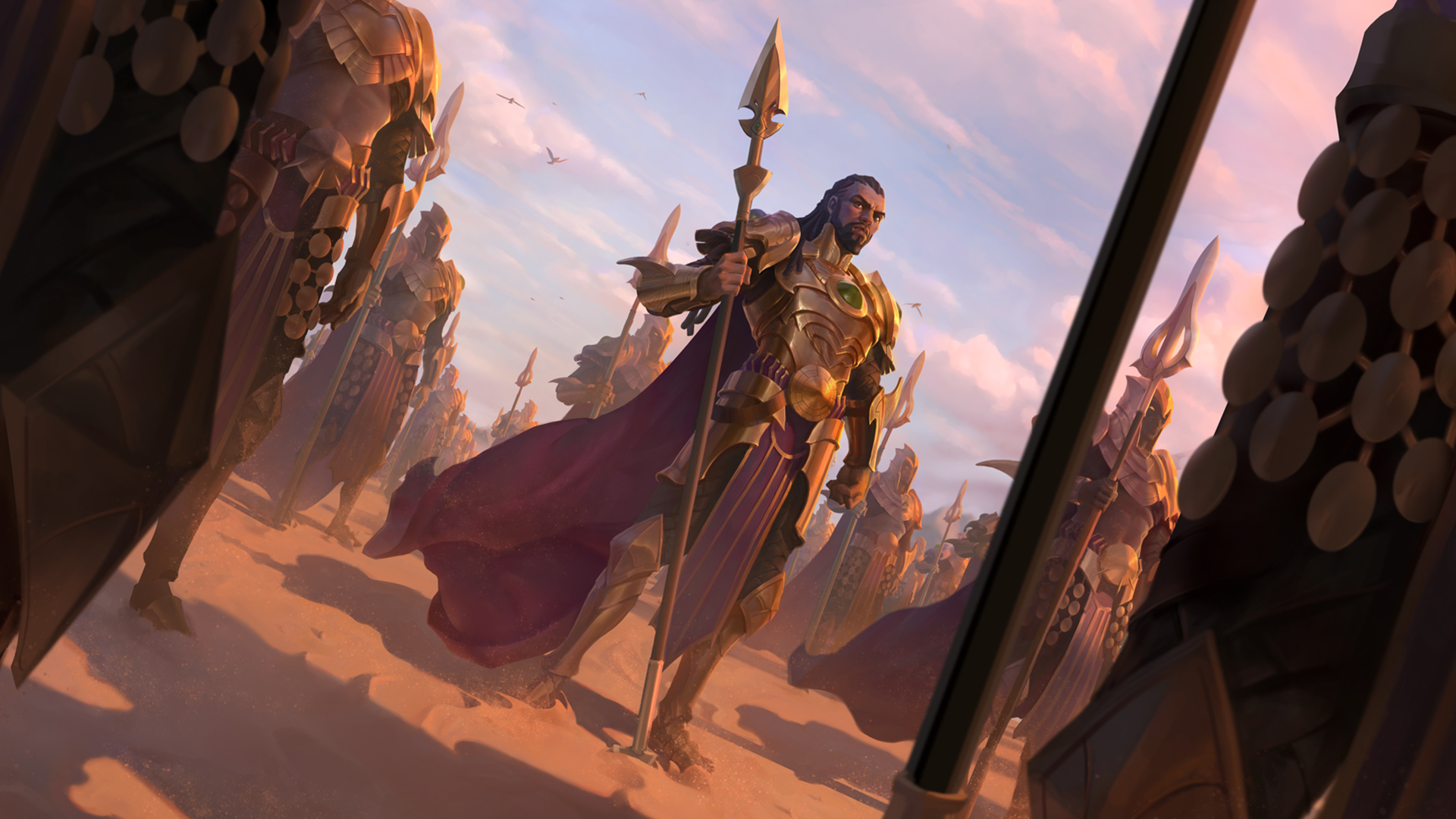 Riot has entered the penultimate day of the teaser season for Legends of Runeterra’s next expansion, Empires of the Ascended.

With today’s cards shown off, there are 106 cards in total revealed from the upcoming expansion. That leaves only four more cards set to be unveiled, including the last champion. 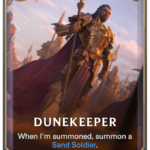 Most of these cards have something to do with summoning Sand Soldiers, tokens that relate to the Emperor of Sands from League of Legends, Azir. Sand Soldiers are 1/1 Ephemeral units with a Nexus Strike ability that deals extra damage to the opponent’s health total.

Inspiring Marshal is a Rare five-mana 4/6 unit that has a static ability that gives any friendly allies you summon a temporary +2/+0 for the round. Finally, Sandstone Chimera is a Rare 12-mana 6/6 unit that reduces its cost by one for each time an allied creature attacked in that game.

Out of all of the cards revealed, Dunekeeper has the most aggressive implications. If you go first and you play him on turn one and there’s no response from the opponent, that’d be four unanswered damage when combined with the Sand Soldier.

Aside from use in aggro decks, Dunekeeper benefits from Ephemeral synergies and decks that rely on massive unit-flooding abilities.

Emperor’s Dais is a cheaper alternative to the recently revealed Sandswept Tombs. But instead of summoning a massive 5/2 Ephemeral unit each time you declare a battle, you get a 1/1 with the potential to deal an extra point of damage. The Dais gives you an inexpensive way to summon more tokens that are fated to perish if your main goal is constant unit summons over damage.

Sandcrafter has fair stats for her cost, but the main draw toward her is the constant ability to spawn Sand Soldiers if she’s not properly dealt with. If you’re going second in a match, Sandcrafter’s importance is doubled since she’s most effective whenever you declare an attack with her.

Despite these weaknesses, Desert’s Wrath does summon at least two 2/1 Ephemeral units, which will either dissuade opponents from attacking you if you’re defending or have the potential to deal six damage to the opposing Nexus if they’re left unblocked.

Inspiring Marshal pairs up with these endless spawning of Sand Soldiers fairly well. While the Marshal’s stats aren’t spectacular in their own right, the higher health total gives it more opportunities to spread that temporary +2/+0 every round that tokens are brought about.

Sandstone Chimera serves as a sizable middle-of-the-curve threat for these decks that focus on summoning endless Ephemeral units. If you can have at least seven units attacking, the stats-to-cost ratio becomes moderately fair. But if you declare enough attacks throughout the game, a zero-mana 6/6 can turn the tide of battle if drawn at the proper time.

You can test out these cards and more when LoR: Empires of the Ascended is released on March 3.