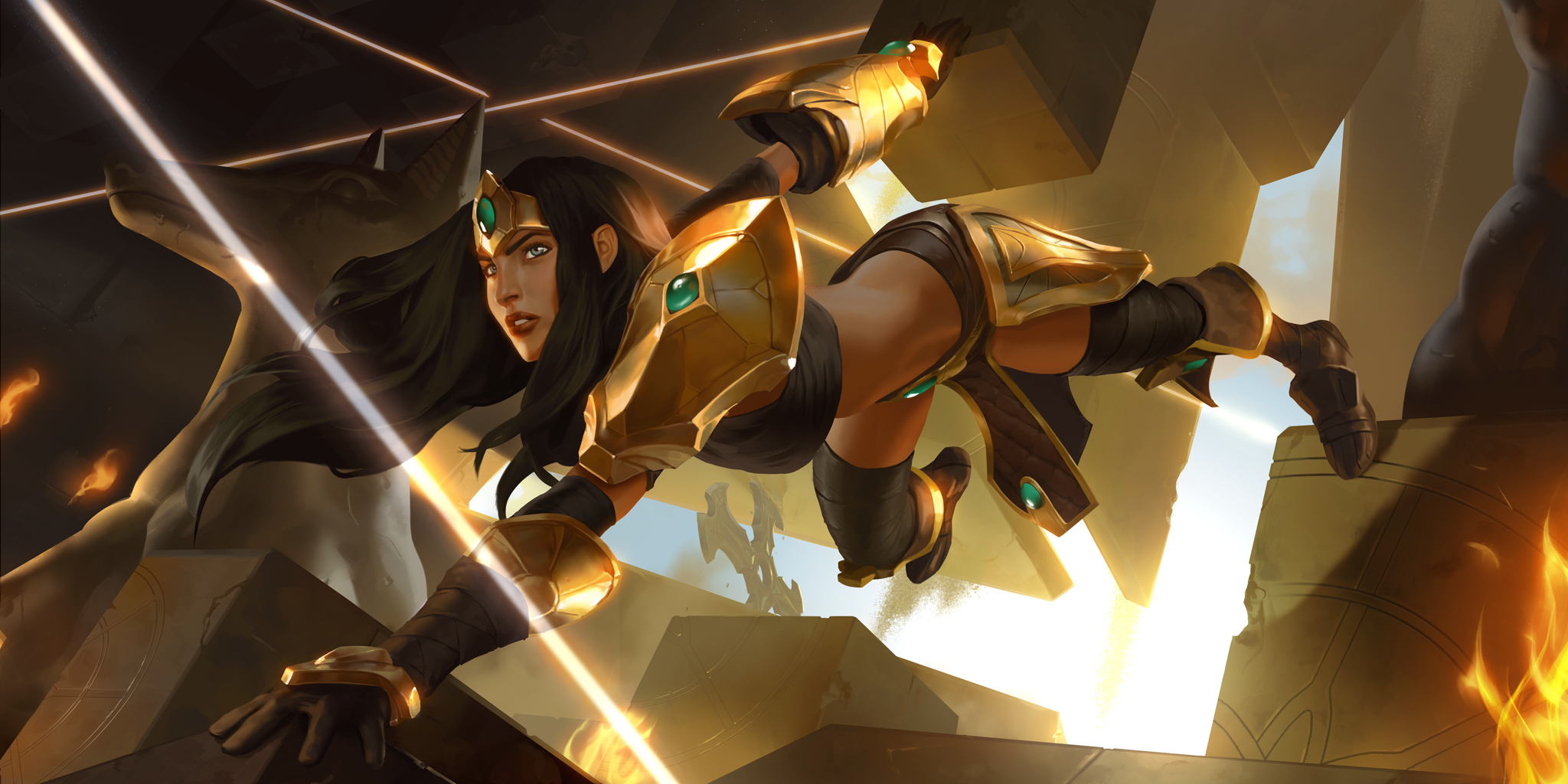 Riot, in partnership with Mobalytics, showed off eight new collectible cards from the region of Shurima: 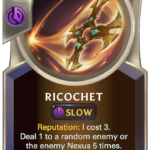 Ricochet is a Common six-mana Slow spell that deals one damage to a random enemy or Nexus five times. The cost of this spell can be reduced to three if you triggered Reputation earlier in the match.

Boomerang Blade is a Rare seven-mana Slow spell that has one of your allies simultaneously strike the strongest and weakest enemy at the same time.

Payday is a Common two-mana Focus spell that creates a Lucky Find within your hand.

Inner Sanctum is a Common three-mana Landmark with a Countdown of one that will provide you two Lucky Finds in hand once the timer concludes. The cost of Inner Sanctum can be reduced to zero if you satisfied the Reputation requirements earlier in the game.

Lucky Find is a zero-mana Fleeting Focus spell that selects an ally to buff between one of three random bonuses or effects. Here’s the list of the following effects that your unit can receive:

Waking Sands is a Common two-mana Slow spell that summons a Sandstone Charger.

Sandswept Tomb is a Rare five-mana Landmark that summons a Sandstone Charger whenever you declare an attack with your units.

Sandstone Chargers are two-mana 5/2 token units with Ephemeral, meaning they deal massive damage before fading away after striking or when the round ends.

Callous Bonecrusher is a Common four-mana 6/3 unit with a Reputation ability that can reduce the cost to two if you performed four strikes with units that had five or more power earlier in the game.

Ruin Runner is a Common five-mana unit with a 6/4 stat line that wields both the Overwhelm and SpellShield keywords.

Comparable to Make it Rain, Ricochet can provide potential board clears of many weaklings or direct burn to the enemy Nexus if their board is empty. While Ricochet may have a difficult time finding a spot in most decks, there’s a chance it will still be played since it’s Sivir’s champion spell.

Boomerang Blade can not only serve as a spell that provides board control, but also as a card that can single-handedly activate half of the requirements needed to achieve Reputation if you target a powerful unit. The glaring weakness to Boomerang Blade is that your opponent can remove your selected ally with removal spells, which can make you waste a ton of mana if the card does not successfully resolve.

Payday and Inner Sanctum are both potent cards that can empower your units in unique ways depending on when you cast them. Since Inner Sanctum provides you Lucky Finds the turn after you immediately play it, you can summon the Landmark a turn in advance that you plan on playing a unit that would appreciate buffs.

Since Payday is a Focus spell, you can either play it before you attack to gain an offensive keyword boost or use it in response to an opponent’s summon for a potential defensive mechanic like Tough or SpellShield. Lucky Finds also have powerful synergy with Sivir’s second level since she can spread the keywords around while she’s attacking.

Waking Sands and Sandswept Tombs are both cards that can summon Sandstone Chargers which can assist you in combat and help activate your Reputation. Aside from helping you achieve abilities which require multiple summons or powerful strikes, Sandstone Chargers can also assist in leveling up Hecarim or aiding Shark Chariot’s effectiveness.

Callous Bonecrusher is an awkward card to evaluate since at four mana its stats are meager and below average. But if she is played for her Reputation cost, she is more than worth her stats in mana cost. The main downside to judging her by her Reputation ability is that it’s impossible to get in four strikes with five or more power by turn two.

Comparable to Darius, Ruin Runner is an efficient aggressive unit thanks to her Overwhelm and SpellShield keyword for only five mana. While there’s nothing special about her, the accompanying simple keywords can make it a difficult task for any opponents to remove the Ruin Runner. Thanks to these factors, she serve as a top end for aggressive decks or another sizable threat for midrange lists.