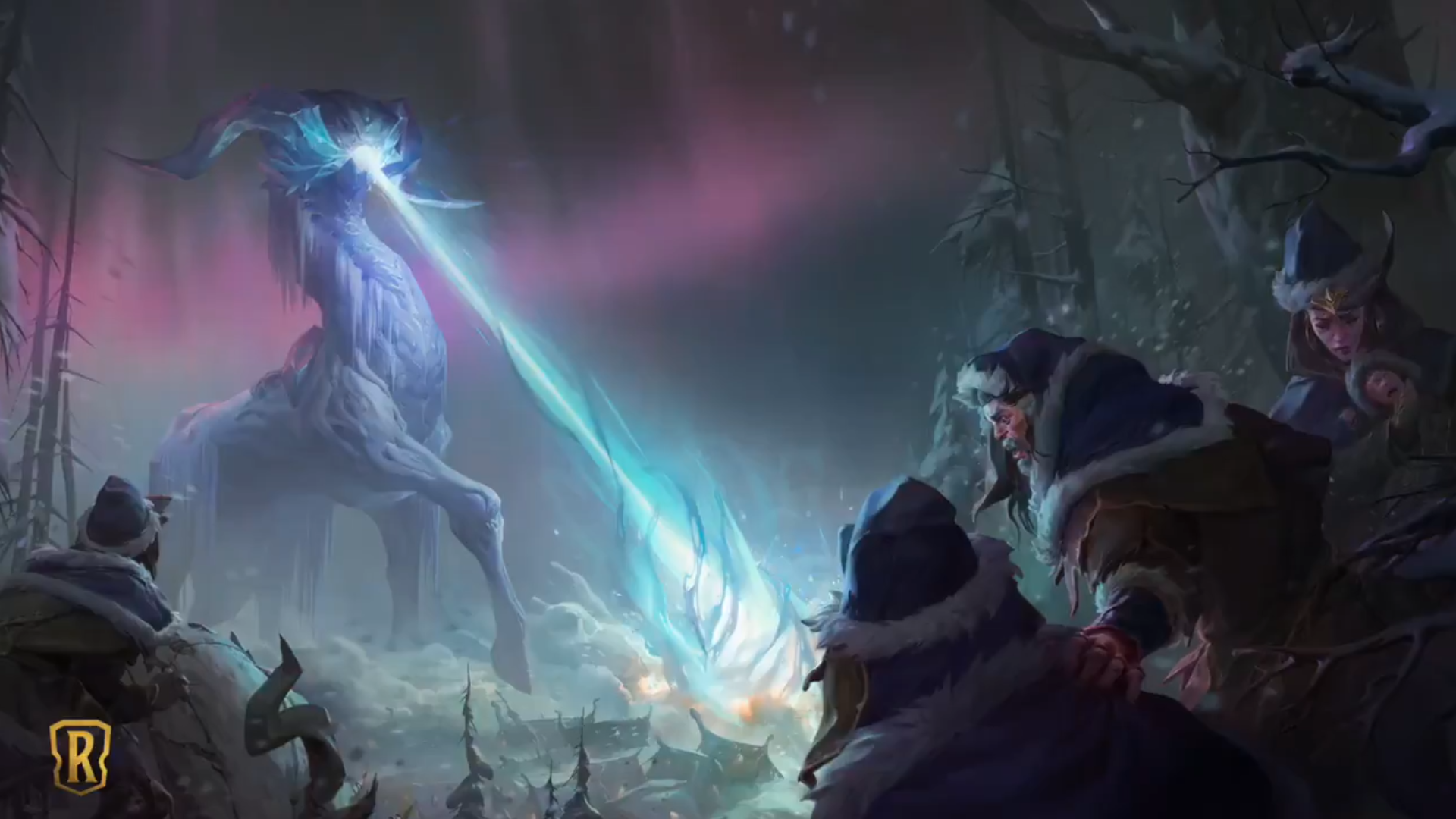 The reveal season for Legends of Runeterra’s Cosmic Creation expansion continued today by showing off six new cards: It That Stares, The Scargrounds, Monastery of Hirana, Homecoming, Wiggly Burblefish, and Boomship.

It That Stares is an eight-mana rare 8/8 from Freljord with a play ability that lets you either Obliterate all Landmarks or deal two damage to all other units. The Scargrounds is an Epic Landmark from Freljord that gives any ally that survives damage +1/+0 and Tough. 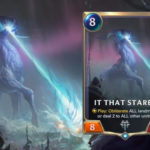 Monastery of Hirana is an Epic Landmark from Ionia that creates a Sanctuary at the start of each round. Sanctuary is a Fleeting one-mana Burst spell that Recalls an ally to your hand. It also has a similar casting speed restriction to Gems and Lulu’s Help Pix. Homecoming is a five-mana common Fast spell that forces you to recall an allied unit or Landmark to recall an enemy unit or Landmark.

Wiggly Burblefish is a six-mana Epic 3/1 unit from Bilgewater with Elusive and two powerful abilities. The first effect grants it the power to reduce its cost by one for each spell that you’ve cast this game. The other ability of the Wiggly Burblefish gives you a random one-cost spell from your regions each time you summon it. Boomship is a three-mana rare Slow spell that deals one damage to a unit and then summons Powder Kegs equal to the damage that was dealt.

It That Stares is Freljord’s version of Landmark destruction that was teased in previous entries. Aside from its function of Landmark removal, it also has the power to cull through wide boards of weak units due to its two damage AoE against all other units. The Scargrounds is Freljord’s Landmark that pushes forward the Scar and Crimson archetype. The card’s ability to protect your Braum, Vladimir, and the supporting cast of units with Tough will be valuable to the archetype.

Monastery of Hirana is Ionia’s Landmark that builds upon Ionia’s identity of self recall. While the effect will be potent and consistent to constantly return your allies and repeating effects, the mana investment is high. Spending three mana to develop a Landmark to do nothing will put you far behind, and then spending one mana each time you want to recall a unit will also make you lose tempo.

Homecoming is Ionia’s version of Landmark removal At five mana, it’s comparable to Will of Ionia, which has a similar ability. The main draw of Homecoming is that it allows you to repeat your summon abilities, like Monastery of Hirana and Sanctuary. Unless Riven and Zoe synergize with self recall, it may be tough for these two cards to find a home.

Boomship provides interesting removal for Bilgewater decks using Powder Kegs. While the effect looks interesting at first glance, you’re effectively holding over your current reserve of Powder Kegs to remove a giant threat from the opponent. Since the damage you’re doing will be boosted by your current set of Kegs, you’re effectively adding one Keg to your repertoire for future damage opportunities.

While today’s reveals only showed off the two remaining cards from these three regions, there are no context clues that were given that would indicate the next champion to be revealed. But due to previous leaks, the next champion that will likely be teased within the next two days will either be Riven or Zoe. Between the two, it’s more likely to be Riven, though, since Zoe is a part of the newest region of Targon.

You can try out these cards and more when LoR: Cosmic Creation goes live on Dec. 16.